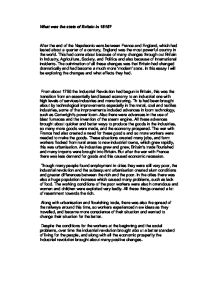 What was the state of Britain in 1815? After the end of the Napoleonic wars between France and England, which had lasted about a quarter of a century, England was the most powerful country in the world. This had come about because of many changes throughout Britain in Industry, Agriculture, Society, and Politics and also because of International incidents. The culmination of all these changes was that Britain had changed dramatically and had become a much more 'modern' state. In this essay I will be exploring the changes and what effects they had. From about 1750 the Industrial Revolution had begun in Britain, this was the transition from an essentially land based economy to an industrial one with high levels of services industries and manufacturing. This had been brought about by technological improvements especially in the metal, coal and textiles industries, some of the improvements included advances in loom technology, such as Cartwright's power loom. Also there were advances in the use of blast furnaces and the invention of the steam engine. All these advances brought about quicker and better ways to produce the goods in the industries, so many more goods were made, and the economy prospered. The war with France had also created a need for these goods and so more workers were needed to make the goods. ...read more.

This had the effect of putting many farm labourers out their jobs and the new enclosures also forced small-time farmers out as they lost their rights to the common land. Despite all these problems the agricultural revolution made a very positive impact. It pushed the farm labourers into towns and cities, which played an important part in the industrial revolution. It also allowed Britain to just about feed a very rapidly growing population. Throughout all this period of change, one thing can be seen as almost constant, the power of the Tories, between 1815 and 1830, mostly under Lord Liverpool, the Whig party failed to occupy office at all. The Tories, Whigs and the Radicals were not like political parties of the present, they were much more vague groups, with no definite policies. In general, the Tories wanted to stay with the status quo, with the same powers for the monarchy (who were not autocratic but were still very powerful) and the Anglican Church, and to keep very strict law and order. Some Tories were also in favour of cautious humanitarian reform, which could be seen as policy to keep them in power and to not allow another French revolution to happen in Britain. The Whigs saw themselves as more liberal despite also being wealthy landowners (Britain was an oligarchy, with the power in the hands of the wealthy landowners). ...read more.

So society faced a lot of turbulence at this time. Internationally the situation seemed better for Britain, the defeat of France had pushed Britain's prestige even and along with a booming economy and a large empire, Britain was the most powerful country in the world. Notwithstanding the war the France, Britain usually tried to keep out of European affairs, the kept a policy of 'splendid isolation', looking after themselves and their colonies. But sometimes Britain had to get involved, they had fought the war against France to keep the power balanced in France, to make sure no one country got too powerful and affected Britain's prime position in the world. Britain also had to get involved occasionally to further her trading interests, as at the time Europe was the biggest buyer of Britain's exports. Britain also had to protect its political interests, supporting liberalism and nationalism, which meant it, got into disagreements with autocratic governments like Austro-Hungary and Russia. Britain also became involved in the scramble for the colonisation of Africa, which later added to Britain having the biggest empire the world had ever seen. So in 1815 Britain had begun to go through a period of change, especially the industrial revolution which was to change Britain totally and affected Britain's society, politics and international situation. ...read more.