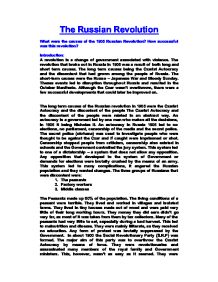 What were the causes of the 1905 Russian Revolution? How successful was this revolution?

The Russian Revolution What were the causes of the 1905 Russian Revolution? How successful was this revolution? Introduction: A revolution is a change of government associated with violence. The revolution that broke out in Russia in 1905 was a result of both long and short term causes. The long term causes being the Czarist Autocracy and the discontent that had grown among the people of Russia. The short-term causes were the Russo - Japanese War and Bloody Sunday. Theses events led to disruption throughout Russia and resulted in the October Manifesto. Although the Czar wasn't overthrown, there were a few successful developments that could later be improved on. The long term causes of the Russian revolution in 1905 were the Czarist Autocracy and the discontent of the people The Czarist Autocracy and the discontent of the people were related in an abstract way. An autocracy is a government led by one man who makes all the decisions, in 1905 it being Nicholas II. An autocracy in Russia 1905 led to no elections, no parliament, censorship of the media and the secret police. The secret police (okrhana) was used to investigate people who were thought to be against the Czar and if caught were imprisoned or shot. ...read more.

Despite their relative wealth they too were unhappy because they had no Political Power - they were not involved in the Government of the country. They wanted a political system based on elections and a Parliamentary democracy. The Liberals led the middle class, they demanded a say in the government of the country, political power and opposed a working class revolution. A short- term cause of the revolution was the Russo - Japanese War. At the beginning of 1904 both Japan and Russia showed interest in Manchuria. Russian troops were sent to Manchuria to protect Russian interests in this region. Japan viewed the Russian moves as a direct threat. A war looked very likely between the two countries and the prospect of such a war pleased Nicholas II. He believed that if a war occurred it would divert attention from the discontent in Russia. It was expected that Russia would win as Japan were a fairly weak power. Victory would increase the popularity of Nicholas and his Government and make the chances of demonstrations/strikes unlikely. During the month of February 1904, the Japanese launched an unprovoked attack on Port - Arthur (Russia). The war saw heavy casualties on both sides. ...read more.

After the October Manifesto the middle - class seemed satisfied as they thought they had gained some political power. The peasants and factory workers, however, were less satisfied, as they didn't trust the Czar. The Government now felt in a much stronger position. The opposition had divided and the Government therefore responded by its usual strong-arm tactics, against the remaining strikers, demonstrators and revolutionaries. Nicholas was not to be trusted, he later turned his back on what he had promised and Nicholas regretted the October Manifesto. He had only granted the October Manifesto because of the General Strike and the weakness of the Government at the time. After the strike was over and its leaders in prison he opposed any idea of a Parliament with any real powers. Conclusion: In my opinion, although the Czar wasn't overthrown there were a few successful developments. The Russian Revolution failed in the sense that it did not see the collapse of Nicholas or the Czar. However, it could be seen as a success as it showed that if the conditions were serious enough the system could be overthrown. It also became clear that any revolution would not succeed if the army remained loyal to the Czar. Nicholas should have seen the events of 1905 as a warning, as if the people of Russia were angry enough they would use force to achieve their demands. ...read more.