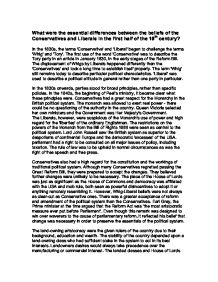 What were the essential differences between the beliefs of the Conservatives and Liberals in the first half of the 19th century?

What were the essential differences between the beliefs of the Conservatives and Liberals in the first half of the 19th century? In the 1830s, the terms 'Conservative' and 'Liberal' began to challenge the terms 'Whig' and 'Tory'. The first use of the word 'Conservative' was to describe the Tory party in an article in January 1830, in the early stages of the Reform Bill. The displacement of Whigs by Liberals happened differently than the 'Conservatives' and took a long time to establish itself properly. The term 'Whig' still remains today to describe particular political characteristics. 'Liberal' was used to describe a political attitude in general rather than one party in particular. In the 1830s onwards, parties stood for broad principles, rather than specific policies. In the 1840s, the beginning of Peel's ministry, it became clear what these principles were. Conservatives had a great respect for the Monarchy in the British political system. The monarch was allowed to exert real power - there could be no questioning of the authority in the country. Queen Victoria selected her own ministers and the Government was Her Majesty's Government. ...read more.

However, Whig-Liberal beliefs were not always as clear-cut as Conservative ones. There was a greater acceptance of reform and amendment of the political system than the Conservatives. Earl Grey, the Prime minister at the time argued that the Reform Act was 'the most aristocratic measure ever put before Parliament'. Even though this remark was designed to win over waverers to the cause of parliamentary reform, it reflected his belief that change was necessary in order to preserve the essentials of the political system. The land-owning aristocracy were the given rulers of the country due to their background, education and wealth. The stability of the country depended upon a land-owning class who had sufficient stake in the system to act in its best interests. Landowners desires would always take precedence over the manufacturing or commercial interest. The landed classes and House of Lords both depended on the hereditary system - titles and land were inherited in their entirety by the eldest sons. The Liberals were more open minded in allowing the middle classes into the political framework. ...read more.

The Liberals wanted less emphasis on the privileges of the Church of England and more attention to religious liberty. Liberals were more in favour of nonconformist denominations and sometimes the Roman Catholics - they were starting to believe in 'equality of opportunity for all', regardless of which Christian denomination an individual belonged to. This was connected with a concern to use the propertied wealth of the Church for the wider good, for example in education. The acceptance of the commercial industry and urban changes through which Britain was going led to a concern with such issues. There was great respect for the British constitution - a British protestant monarch was head of a national church and an English-based land-owning aristocracy with many estates in Wales, Scotland and Ireland was seen as part of one United Kingdom. After the extension of the vote in 1832, the House of commons was becoming accepted. Whilst the privileges of the church of England were to be maintained, there was to be religious toleration for other churches. However, there was still suspicion of Roman Catholics as foreign agents. Catholic emancipation was passed in 1829. ...read more.