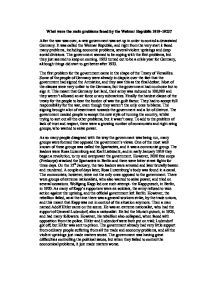 What were the main problems faced by the Weimar Republic 1919-1923?

What were the main problems faced by the Weimar Republic 1919-1923? After the war was over, a new government was set up in order to control a devastated Germany. It was called the Weimar Republic, and right from the very start it faced many problems, including economic problems, several violent uprisings and deep social divisions. The government seemed to be coping with the first problems, but they just seemed to keep on coming. 1923 turned out to be a crisis year for Germany, although things did start to get better after 1923. The first problem for the government came in the shape of the Treaty of Versailles. Some of the people of Germany were already in dispute over the fact that the government had signed the Armistice, and they saw this as the final defeat. Most of the clauses were very unfair to the Germans, but the government had no choice but to sign it. This meant that Germany lost land, their army was reduced to 100,000 and they weren't allowed an air force or any submarines. Finally the hardest clause of the treaty for the people to bear the burden of was the guilt factor. ...read more.

He led the Munich putsch, in 1923, and had many followers. However, his rebellion also collapsed, when faced with opposition from the police. Hitler and Ludendorf were both put on trial; Ludendorf got off, but Hitler was sent to prison. The government already had very little support from ordinary people suffering from all the trade and economy problems, and all the violent uprisings just made matters worse. The government was having great difficulties controlling the political issues, but when they failed to control the economical problems, it just made matters worse. Germany was already faced with destruction and poverty, yet one of the clauses of the Treaty of Versailles meant that they had to pay reparations to cover costs of war damages. The amount was fixed at 132,000 million marks (�6,600 million), which was ridiculously high seen as Germany had lost important resources and industrial land in the Treaty of Versailles. However, Germany had no choice in the matter, and if they didn't pay, the Allies would invade. The first instalment took all the money and goods the government could scrape together, and so they fell behind on the second instalment. ...read more.

Some people wanted a communist revolution, to give power to the workers, whereas others wanted a strong government to protect industry from trade unions and the threat of communism. Nearly everyone felt that the government was not doing a good job of running the country, and that it should be replaced. However, everyone seemed to want different things. One thing everyone did want, though, was a better way of life. The Weimar Republic seemed to have to deal with so many problems, and it is amazing that they survived for so long. They faced opposition from left and right wing groups from 1919, all the way up to1923, and some of them were serious threats. The government also had to face the economic problems that seemed to go from bad to worse, until in 1923 there was a serious crisis that left many people in poverty. This then made the social problems worse. All the problems however seemed to stem from the Treaty of Versailles, making things so bad, it looked like Germany was on the verge of collapse. Nearly everyone blamed the problems on the government and the signing of the Treaty of Versailles. There was a lack of trust and respect for them which eventually led to the fall of the Weimar Republic. ...read more.