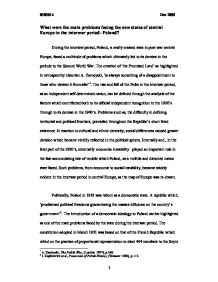 What were the main problems facing the new states of central Europein the interwar period - Poland?

What were the main problems facing the new states of central Europe in the interwar period- Poland? During the interwar period, Poland, a newly created state in post-war central Europe, faced a multitude of problems which ultimately led to its demise in the prelude to the Second World War. The creation of 'the Promised Land' as highlighted in retrospect by historian A. Zamoyski, 'is always something of a disappointment to those who viewed it from afar'1. The rise and fall of the Poles in the interwar period, as an independent self determined nation, can be defined through the analysis of the factors which contributed both to its official independent recognition in the 1920's through to its demise in the 1940's. Problems such as, the difficulty in defining territorial and political frontiers, prevailed throughout the Republic's short lived existence. In reaction to cultural and ethnic diversity, social differences caused greater division which became vividly reflected in the political sphere. Internally and , in the later part of the 1920's, externally economic instability played an important role in the fast accumulating tide of trouble which Poland, as a volitile and distorted nation state faced. Such problems, from economic to social instability, became widely evident in the interwar period in central Europe, as the map of Europe was re-drawn. Politically, Poland in 1918 was reborn as a democratic state. ...read more.

sphere, relations between the diverse social communities and regions of the newly instated Republic, mirrored the divisions highlighted within the parliamentary forum. Approximately one-third7 of the polish population were non-poles. The largest non-Polish nationality was the Ukrainians, followed by the Jews, Bearussians and the Germans. Those from Slavic minorities (Ukrainians and Belorussians) possessed a territorial base in the kersy and eastern Galicia as well as aspirations for political independence. The aspiration for self-determination was promoted by all minorities in the new state of Poland. As historian R.J. Crampton highlights 'The new Poland was a coat of many colours.'8 and had inherited territory from the Austro-Hungarian Empire, Germany and Russia. Such inheritance brought great diversity. Politically, economically and socially, the divided inheritance left Poland with three railway networks and economic infrastructures. There were no less than six currencies, varying educational practices, legal systems, which were not completely standardised even by 1939, and a multitude of military legacies. The repercussions of such inheritance can be highlighted as another problem which Poland faced in the interwar period. Ethnicity and subsequently the 'Jewish question'9 was perceived as another 'stumbling block' in the establishment of the new Republic. As highlighted by historian E. Mendelsohn 'The Polish nation, it was felt, had not shed its blood and sacrificed its sons in order to establish a state in which vast territories and important financial resources would be controlled by non-Poles'.10 The question of true national identity and the contention between pole versus non-pole led to the increase of anti-Semitic belief in the republic. ...read more.

Such lack of international creditability was another key problem faced not only by Poland but by all new European states. This caused serious problems in the later 1930's as the threat from Nazi Germany increased. New states became 'expendable and somewhat at the disposal of Britain and France'18 in the struggle to appease Hitler's expansionist aims. During the interwar period, the newly created central European states faced a multitude of problems. Taking Poland as an example, social, political and economic diversity from the outset presented problems which could not be easily overcome. Within the political forum, social divisions presented a government made up of coalitions by coalitions. Such coalitions failed to introduce the continuity of policy required for the new Republic to socially and economically prosper in the interwar period. Through the inheritance of several currencies, industrial establishments and educational systems, economically Poland remained unstable throughout the interwar period. The reason for such economic instability, as highlighted, originated from the fact that Poland had been established across varying economic and social territorial frontiers. Such frontiers presented problems relating to ethnicity with the introduction of 'the Jewish question' and also the anticipation of other minority groups for independent rule and recognition. These somewhat common internal factors further alienated Poland, and the other newly formed states, in the international forum. To conclude, the post-war treaties transformed the map of Europe in order to reflect a continent driven by self-determination and identity however, in doing so, it created many more problems. ...read more.