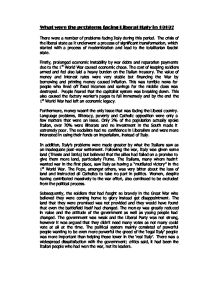 What were the problems facing Liberal Italyin 1919?

What were the problems facing Liberal Italy in 1919? There were a number of problems facing Italy during this period. The crisis of the liberal state as it underwent a process of significant transformation, which started with a process of modernization and lead to the totalitarian fascist state. Firstly, prolonged economic instability by war debts and reparation payments due to the 1st World War caused economic chaos. The cost of keeping soldiers armed and fed also laid a heavy burden on the Italian treasury. The value of money and interest rates were very stable but financing the War by borrowing and printing money caused inflation. This was terrible news for people who lived off fixed incomes and savings for the middle class was destroyed. People feared that the capitalist system was breaking down. ...read more.

but believed that the allies had failed on a promise to give them more land, particularly Fiume. The Italians, many whom hadn't wanted war in the first place, saw Italy as having a "mutilated victory" in the 1st World War. The Pope, amongst others, was very bitter about the loss of land and instructed all Catholics to take no part in politics. Women, despite having contributed massively to the war effort, also continued to be excluded from the political process. Subsequently, the soldiers that had fought so bravely in the Great War who believed they were coming home to glory instead got disappointment. The land that they were promised was not provided and they would have found that even the battlefield itself had changed. ...read more.

and the PPI (popolari, the Catholic Party). This meant that traditional political groups such as the Liberals no longer had a secure hold on power. The PSI had radicalized; large-scale strikes occurred; factories were occupied by red guards and the years 1919-1920 were referred to as the 'red years' - the two years of socialist anarchy. In these years Italy's government changed frequently. One of the nationalist critics of the government was Gabriele D'Annunzio writer who in September 1919, with a handful of supporters marched into Fiume and took over the government there. As a result of this, at 1920 no leader had the country under much control as rebels broke the law where and when they wanted to. The threat of socialist revolution could emerge, there was political instability with the frequent change of governments, and none of the politicians seemed to know how to re-establish law and order. ...read more.