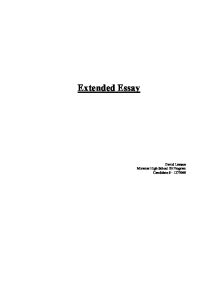 When disputing over international borders of relations it is very common for history to be distorted in order to gain political power. The relationship between China and Tibet proves this point dramatically.

Extended Essay David Lawson Miramar High School IB Program Candidate # - 1275060 Abstract When disputing over international borders of relations it is very common for history to be distorted in order to gain political power. The relationship between China and Tibet proves this point dramatically. Chinese historians have been trying for years tried to prove that Tibet has always been considered part of China. The main aim of this investigation is to determine whether or not the Chinese claims of suzerainty over Tibet are justified. Upon a close examination of the historical relations between the two countries it can be seen that the Chinese have distorted and perverted the facts for political means. Much of the Chinese records indicate about relations between Tibet and China can be seen to be false. Also, the atrocities that have occurred in Tibet show that China is only interested in using Tibet for her personal gain. And if China ever did have a right to claim suzerainty over Tibet they should have lost it as a result of the maltreatment of the Tibetan people and land. The relationship between the Tsang Dynasty in China and the kings of Tibet in the 7th and 9th centuries During the early 7th century Tibet became unified under King Songsten Gampo while the Chinese Tsang dynasty was being established. At this time in history occur the first recorded contacts between the two countries. The two major incidents that the Chinese will refer to during this time period are the marriage of a Chinese princess to Songsten Gampo in 641 and a peace pledge signed between the two countries in 821. Chinese historians claim that as a result of this marriage and the subsequent meetings that occur between China and Tibet that they "cemented political and kinship ties of unity and formed close economic and cultural relations, laying a solid foundation for the ultimate founding of a unified nation" (Tibet: Its Ownership and Human Rights Situation, China White Paper, 1992, p.3). ...read more.

However it did show that Tibet was an independent nation which could enter into binding agreements with other countries. The Communist Invasion of Tibet (1949-1959) and the 17-point agreement In 1948 there were rumors on Chinese spies in Tibet, which were most likely there to determine their military strength. Soon after the Tibetan governor in the east reported that there were Chinese forces massing along Tibet's eastern border. The national assembly convened and decided that Tibet was too weak to defend themselves and must surrender peacefully to preserve their people. Suddenly China invades eastern Tibet in 1950. Soon after two officials are received in Lhasa bearing a message from that governor in the east asking permission to begin peace negotiations with China. The message also said that the Chinese commander promised he would not invade any further. At this point the 14th Dalai Lama takes control of the government at only 16. The governor in the east and four other delegates are sent to Peking to begin the peace negotiations with China. However, while there they are forced to sign the 17-point agreement or else the Tibetan people would suffer military action. Soon after the agreement was signed a Chinese general moved into the capital, Lhasa, and the People's Liberation Army took control of all of Tibet. Chinese historians describe the invasion of Tibet by the Peoples Liberation Army as a peaceful liberation. The 17-point agreement was signed between the Chinese and Tibet in 1951, which guaranteed Tibetan autonomy. The Chinese also state that the agreement "enjoyed the approval and support of the people from every ethnic group in Tibet" (China White Paper, p.14). In reality Chinese suppression of traditional Tibetan practices drove hundred of Tibetans into the mountains and thousands more moved to Lhasa to escape persecution. By 1959 the Tibetans could take no more and an uprising occurred which was quickly crushed. ...read more.

Throughout the 60s and 70s the Chinese operated a nuclear research facility in Tibet. The Chinese have also admitted to using 20 square mile area near Lake Kokunor, the largest lake in Tibet, to dump nuclear waste. Conclusion Chinese claims of suzerainty over Tibet are completely unjustified and false. Upon the examination of the relationship between Tibet and China throughout history it can be seen that at no point did Tibet become an integral part of China. However, there were some incidents that showed the close ties between the countries. Such as the marriage alliance that occurred in the 7th and 8th centuries after a Tibetan king married a Chinese princess. Also, the relationship between the Manchu emperors and the first Dalai Lamas shows that the two countries recognized each other's sovereignty and were willing to be in a peaceful relationship. The Chinese historians' main argument for Chinese suzerainty over Tibet is that it became an integral part of China while they were under Mongol control. The fact that Tibet and China both fell under the political control of the Mongols far from indicates their unification. If this were true then why does Beijing not lay claim on Northern Burma, North Vietnam, Korea, and a large area of Siberia? All of these are countries that fell to the Mongol Empire at the same time as the Chinese. Also, when investigating the events that have occurred in Tibet since Chinese occupation one can assume that the Chinese are only interested in using Tibet for an economic means and for increased living space for their overcrowded country. The atrocities that have occurred in Tibet are countless. Over 1.2 million Tibetan people have been killed by the Chinese in uprisings and as political prisoners. The International Commission of Jurists has even concluded that there is a prima facie case of genocide committed by the Chinese on the Tibetan people. So even if the Chinese actually are justified in claiming suzerainty over Tibet, they are not fit to be governing this country, based upon their actions. ...read more.