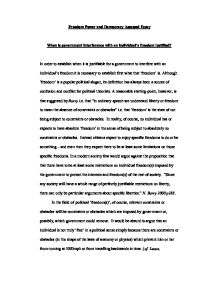 When is government interference with an individual's freedom justified?

Freedom Power and Democracy Assessed Essay When is government interference with an individual's freedom justified? In order to establish when it is justifiable for a government to interfere with an individual's freedom it is necessary to establish first what that 'freedom' is. Although 'freedom' is a popular political slogan, its definition has always been a source of confusion and conflict for political theorists. A reasonable starting-point, however, is that suggested by Barry i.e. that "in ordinary speech we understand liberty or freedom to mean the absence of constraints or obstacles" i.e. that 'freedom' is the state of not being subject to constraints or obstacles. In reality, of course, no individual has or expects to have absolute 'freedom' in the sense of being subject to absolutely no constraints or obstacles. Instead citizens expect to enjoy specific freedoms to do or be something - and even then they expect there to be at least some limitations on those specific freedoms. In a modern society few would argue against the proposition that that there have to be at least some restrictions on individual freedom(s) imposed by the government to protect the interests and freedom(s) of the rest of society. "Since any society will have a whole range of perfectly justifiable restrictions on liberty, there can only be particular arguments about specific liberties." N. Barry 2000 p188. In the field of political 'freedom(s)', of course, relevant constraints or obstacles will be constraints or obstacles which are imposed by government or, possibly, which government could remove. ...read more.

This equation serves to illustrate the disagreement about freedom. It is the difference in opinion as to what constitutes Y (i.e. the obstacle to freedom) that separates those who support 'positive' or 'negative' liberty. Supporters of negative liberty believe that the only restrictions on freedom are legal or physical obstacles and therefore desire minimal government interference. From this perspective they reject the idea of a large welfare state funded by taxation as it means that individuals are not free to spend their money as they desire. Supporters of positive liberty, however, see a lack of material resources and social deprivation obstacles to freedom. They see a need for a welfare state to redistribute the resources in a community otherwise deprived individuals without the necessary means cannot accomplish what they desire. Supporters of negative freedom also reject the idea of individuals being prohibited by law from causing themselves harm. For example: the introduction of a law making the wearing of seatbelts compulsory was seen by many of those who support negative liberty as an unjustified interference by the state since individuals should be free to decide for themselves as rational beings whether or not they wish to protect themselves and the state has no right to make that decision for them. The only even vaguely acceptable argument for making seatbelts compulsory was, in their view, that by doing so the government was protecting the interests of other members of society who would, through taxation, have to pay the cost of providing medical care for those who chose not to wear seatbelts. ...read more.

In those circumstances the 'greater good' (i.e. the protection of the lives and/or health of other members of society) is clear and indisputable. In other cases, however, the position will be much less clear and the answer which one gives to the question will depend upon one's personal views and priorities. The reality is, of course, that almost any step taken by government can be said to constitute an interference with the freedom of at least some individuals and that, particularly if one accepts the concept of 'positive freedom', almost any such interference can be argued to be necessary in order to grant true freedom to those same individuals or to others. Those who object to a ban on fox-hunting, for example, argue that such a ban would constitute an unjustifiable infringement of their freedoms (and even march under the banner 'Liberty') whereas their opponents contend that a ban will not only free foxes from the threat of slaughter but will liberate fox-hunters from their irrational compulsion to kill animals for fun. Equally, those members of the world community who wish to invade Iraq talk of 'liberating' the Iraqis from the tyranny of Saddam's regime whereas Saddam's supporters would no doubt argue that in resisting such an invasion they would be fighting for 'freedom'. In practical terms, then, there is little if any difference between the question: "When is government interference with an individual's freedom justified?" and the question: "What actions is it right for a government to take?" ...read more.