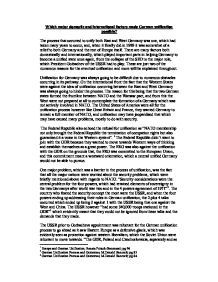 Which major domestic and international factors made German unification possible?

Which major domestic and international factors made German unification possible? The process that occurred to unify both East and West Germany was one, which had taken many years to occur, and, when it finally did in 1989 it was somewhat of a relief to both Germany and the rest of Europe itself. There are many factors both domestically and internationally, which played important parts in helping Germany to become a unified state once again, from the collapse of the SED to the major role, which President Gorbachev of the USSR had to play. These are just two of the numerous reasons for the eventual unification and more will be explained throughout. Unification for Germany was always going to be difficult due to numerous obstacles occurring in its pathway. On the international front the fact that the Western States were against the idea of unification occurring between the East and West Germany was always going to hinder the process. The reason for this being that the two German states formed the frontline between NATO and the Warsaw pact, and from this the West were not prepared at all to contemplate the formation of a Germany which was not actively involved in NATO. The United States of America were all for the unification process however like Great Britain and France, they wanted Germany to remain a full member of NATO, and unification may have jeopardised that which may have caused many problems, mostly to do with security. The Federal Republic also echoed the refusal for unification as "NATO membership not only brought the Federal Republic the termination of occupation rights but also guaranteed it a voice in the Western system". ...read more.

This is evident with the problems, which were occurring with the Chinese and SED party coalition in which many people took to the streets to voice their opinion. The SED did not use force to quell the unhappiness of the people, thus meaning that the people were starting to have more of an influence on current situations hence undermining the authorities, which were in place at the time. Another problem, which was evident within the SED, was the enormous pressure it was under to reform. "Encouraged by examples set in Hungary, Poland and even the Soviet Union, alternatives to the Stalinist central control were being articulated in the GDR"6, however the fact of the matter is that the SED government was aging and utterly incapable of dealing with the demands of reform and even when it tried to reform certain issues domestically, such as the areas of travel and political pluralism, it only seemed to accelerate its demise. Furthermore the limited reforms the SED had made along with the speeches made from Gorbachev, encouraged the reform movement in Easter Germany, and led to the formation of numerous opposition groups, which eventually led to the end of the GDR. The internal collapse of the GDR was a vastly important factor in the unification of Germany. The GDR had been affected by so many different problems. The fact that the Eastern countries like Hungary had relaxed their borders meaning that Germans were able to move through Eastern Europe and into the FRG caused the GDR to become a weakened party. This was due to the fact that the people who moved into the FRG realised how badly the state was being run inside the GDR and hence turned against it. ...read more.

Fortunately for Germany, a third alternative was offered in the face of the CDU. The old leadership had been destroyed and the eastern and western CDU parties united. Helmut Kohl organised the alliance of democratic parties, including the CDU and the free democrats, to stand in the eastern elections, and in the end this alliance won enough votes to be able to form the first democratically elected government of the GDR. In this it was the unification issue which was most important and a main reason for why the CDU won this election was due to the fact that the voters knew that Kohl stood for rapid unification under a capitalist economic system, and this was the way people wanted to go. In Conclusion, there are many things, which were needed in order to make unification a possibility. Firstly the relaxation of the Soviet control, which was granted by Gorbachev, perhaps by accident with this programmes of perestroika and glasnost were extremely important because once the USSR were moving away from communist elements, it made things a lot harder for the GDR. Secondly, the overthrow of the SED in East Germany, which was achieved by a combination of the party leaderships own ineptitude and the demonstrations of the people of the GDR. Thirdly it was essential that there be a pro-unification government and chancellor in Bonn, with the vision to undertake the unification process. Such a man was provided in the form of Helmut Kohl as he took the risk of allowing economic union to precede political union. Kohl recognised that economic union was needed immediately to attempt to turn around the economic crisis that was occurring in the GDR. Therefore the vision and courage of Kohl were essential to the unification process. ...read more.