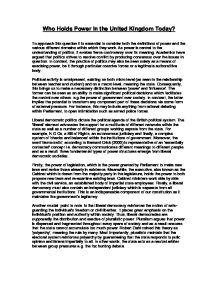 Who Holds Power in the United Kingdom Today?

Who Holds Power in the United Kingdom Today? To approach this question it is essential to consider both the definitions of power and the various different domains within which they work. As power is central to the understanding of politics, it evokes fierce controversy over its meaning. Academics have argued that politics strives to resolve conflict by producing consensus over the issues in question. In contrast, the practice of politics may also be seen solely as a means of execising power, be it through particular coercive forces or a legitimate authoratitive body. Political activity is omnipresent, existing on both micro level (as seen in the relationship between teacher and student) and on a macro level, meaning the state. Consequently, this brings us to make a necessary distinction between 'power' and 'influence'. The former can be seen as an ability to make significant political decisions which facilitates the control over others. e.g.the power of government over society. In contrast, the latter implies the potential to transform any component part of these decisions via some form of external pressure. For instance, this may include anything from rational debating within Parliament, to open intimidation such as armed police forces. Liberal democratic politics dictate the political agenda of the British political system. The 'liberal' element advocates the support for a multitude of different networks within the state as well as a number of different groups working seprate from the state. For example, N.G.Os, a Bill of Rights, an autonomous judiciary and finally, a complex system of 'checks and balances' within the institutions of government. ...read more.

This is because the state is the result of the class system and its main concern is to conserve and defend both class domination and exploitation. Lenin makes reference to the state by claiming that it is 'an instrument for the oppression of the exploitated class'. Of course, it is certainly recognisable that both elitists and Marxists alike share some similarities. This is illustrated in the view that cohesive political elites are predominant in the U.K, and that democratic institutions are artificial. However, although we must realise that both Marxists and Elitists have indeed reached the same conclusions, it is vital that we also realise that they fervently differ on the means in which they reach such conclusions. Marxism proposes the notion that the root of the problem lies in the economic structure of society, suggesting that the elite (or the 'ruling class') only holds power because it controls and owns capital. Of course, the Elitists argue against this by insisting that hierarchy is a natural process and will always inevitably emerge from any given situation and thus the domination of elites is psychological, not artificial. In short, Marxists believe that capitalism exists only to serve the interest of the bourgeoisie, the ruling class, and as a result the proletariat will be inextricably oppressed. A striking example of the Marxist theory put into practice would be that of the tobacco industry, where multi-international financial transactions are taking place amongst an elite few (which are, in turn accumulating great wealth) ...read more.

We like to deceive ourselves that we live in a 'democracy' but because of our archaic voting system of 'first-past-the-post', the government cannot represent views of the majority. Also, in a true democracy the War in Iraq would not have happened, considering the huge number of people that turned up to protest against it. Unfortunately, even under the Secret Ballot Act of 1872 whereby we are suposed to have the right to vote annonymously, we are not even entitled to that freedom because the ballot papers are either numbered or colour coded allowing scope for whoever is in power to check how you voted. Consequently, if our representative form of democracy is not democratic, by implication we must live under the rule of a state elite. And if it is the case that such an elite must strive in every way possible to promote big business in order to uphold social cohesion, then surely it is impossible to deny that capitalist interests are the basis of all governmental decisions. It would only be logical to conclude that the concept of who holds power in the U.K today is merely a guise with government being a necessary shadow passed over society by the interests of big business. The reason this stlye of government has endured for so long is perhaps mans neccessity to believe that he has some control over his own destiny or as Thomas Paine so eloquently put it in the "Rights of Man" (1789), "Society is in every state a blessing, but, government in its best state is but a necessary evil". Mikaela Lee-Willson ...read more.