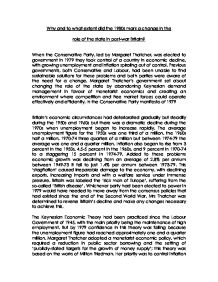 Why and to what extent did the 1980s mark a change in the role of the state in post-war Britain?

Why and to what extent did the 1980s mark a change in the role of the state in post-war Britain? When the Conservative Party, led by Margaret Thatcher, was elected to government in 1979 they took control of a country in economic decline, with growing unemployment and inflation spiraling out of control. Previous governments, both Conservative and Labour, had been unable to find sustainable solutions for these problems and both parties were aware of the need for a change. Margaret Thatcher's government set about changing the role of the state by abandoning Keynesian demand management in favour of monetarist economics and creating an environment where competition and free market forces could operate effectively and efficiently. In the Conservative Party manifesto of 1979 Britain's economic circumstances had deteriorated gradually but steadily during the 1950s and 1960s but there was a dramatic decline during the 1970s when unemployment began to increase rapidly. The average unemployment figure for the 1950s was one third of a million, the 1960s half a million, 1970-74 three quarters of a million but between 1974-79 the average was one and a quarter million. Inflation also began to rise from 3 percent in the 1950s, 4.5-5 percent in the 1960s, and 9 percent in 1970-74 to a staggering 15 percent in 1974-79. Added to these problems economic growth was declining from an average of 2.8% per annum between 1949-73 it fell to just 1.4% per annum between 1973-79. ...read more.

During his time in power he spent nine billion pounds, an increase of 170%, recipients included a 'rainbow coalition' of blacks, feminists, gays, homeless and one-parent families. Mrs Thatcher was forced to change the method of allocating grants in an attempt to control local spending and keep rate increases to a minimum. When this policy failed Margaret Thatcher promised to abolish the GLC and the metropolitan councils and introduce government controls that would give them the powers to enforce reductions in spending. This allowed the government to set rate limits and sixteen Lobour councils were rate-capped. By March 1985 nearly all of these councils gave in, and adopted a legal budget, only Lambeth and Liverpool remained firm, but they were forced to conform after a court ruling favoured the government. Although education remained under state control the Thatcher governments made several changes to encourage greater parental choice and involvement in their children's education. In the 1980 Education Act a small number of children were given the chance to attend private schools under the Assisted Places Scheme. The 1986 Education Act insisted that all state schools had a board of governors that included parents. The 1988 Education Reform Act gave schools the opportunity to opt out of local authority control and become grant- maintained; this enabled them to take control of their own finances and decide how the money was spent, effectively becoming a business. ...read more.

However the Labour party were in favour of further nationalisation and state control of industry, together with import and exchange controls. The Conservative Party in the 1980s changed the role of the state by reducing their role in industry through the privatisation of nationalised industries. The role of local councils was greatly reduced as many services were put out to tender, council housing were either sold or transferred to housing trusts and schools and hospitals were given greater control and became directly answerable to the government. The National Health Service, Social Security, and Education remained predominately under the government's control. Britain retained a mixed economy with essential public services remaining under central governments control, although it shifted towards a capitalist society with more industries being held in the private sector. Giving individuals more choice and freedom proved almost impossible the shift from direct to indirect tax only made the poor become poorer. The 'right to buy' council homes has now been withdrawn and parents right to choose a school for their children is almost non-existent. Mrs Thatcher did reduce union powers, put greater emphasis on free market competition, cut back public spending and minimized state control and intervention. But overall she changed people's attitudes, far more than she changed the role of the state, encouraging self-help, self-belief and because she encouraged people to look after themselves and their families, and not to rely on the state selfish behaviour. ...read more.