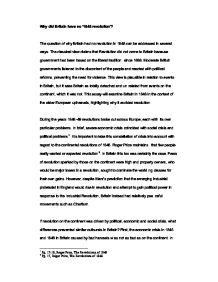 Why did Britain have no '1848 revolution'? The question of why Britain had no revolution in 1848 can be addressed in several ways. The classical view claims that Revolution did not come to Britain because government had been based on the liberal tradition since 1688. Moderate British governments listened to the discontent of the people and reacted with political reforms, preventing the need for violence. This view is plausible in relation to events in Britain, but it sees Britain as totally detached and unrelated from events on the continent, which it was not. This essay will examine Britain in 1848 in the context of the wider European upheavals, highlighting why it avoided revolution. During the years 1848-49 revolutions broke out across Europe, each with its own particular problems. In brief, severe economic crisis coincided with social crisis and political problems1. It is important to take this constellation of crisis into account with regard to the continental revolutions of 1848. Roger Price maintains that few people really wanted or expected revolution2. In Britain this too was certainly the case. Fears of revolution sparked by those on the continent were high and property owners, who would be major losers in a revolution, sought to dominate the working classes for their own gains. However, despite Marx's prediction that the emerging industrial proletariat in England would rise in revolution and attempt to gain political power in response to the Industrial Revolution, Britain instead had relatively peaceful movements such as Chartism. If revolution on the continent was driven by political, economic and social crisis, what differences prevented similar outbursts in Britain? First, the economic crisis in 1845 and 1846 in Britain caused by bad harvests was not as bad as on the continent. In Europe the crisis was magnified by the ancien regime economique, poor cereal harvests of 1845 and the potato blight of 1846 were more severe and the economy was much more dependant on agriculture. ...read more.

No plans were made for an attempted revolution in 1848, perhaps as previous plans had always been found out by spies of the government causing them to make arrests, but Chartists regarded it as a great chance for the aims of the charter to be realised and increased their agitation. The third national petition was set to be presented to parliament on 10th April which some, among elites, worried may become Britains 'February days'. Chartism was strongest in the new industrial towns and rioting in Manchester and Glasgow served to increase fears of a possible Chartist revolution. For any movement to be of influence it had to have wide support in London but in the capital there was apathy among the working class towards Chartism. This can be explained by looking at the divisions between the working class. Rowe states 'each trade divided from every other, and some of the most numerous even from themselves'6 within London. This meant there was no common set of grievances and that the Chartists also lacked good organisation within the capital. This was coupled with the differing situation of the London working population who Rowe describes as 'a quiescent inactive race as far as public matters are concerned' due to lack of a common ideology. Britain had no revolution in 1848 because the use of force had already been ruled out by the majority of the Chartist movement. As a working class movement it relied on radical middling class support. Most Chartists accepted that force would not defeat the government but give it an excuse for repression and scare away the middle class. Peaceful movements on the other hand were much more likely to receive support from the middle class and thus be better organised, larger and much more likely to be successful in gaining concessions. The need for use of force in the language of Chartism was thus to some extent a bluff. ...read more.

Thus response to the revolutions in Britain was mixed, there was some support for them, and sections of the working and middle class looked to them to spark their own movements and gave them support. However as Claeys has commented on the Hungarian cause for example, it was perhaps because they were so distant13that people were so enthusiastic. Certainly the revival of Chartism in 1848 owed a lot to the continental revolutions but it was a revival of Chartism, a movement that would not lead towards revolution. Finn explains that early in the year 1848 support had actually served to united the 'Liberal left wing, Dissent, and the Chartist movement'14. However, this was to be only for a short time. The state always remained in control. To conclude, Britain did not have a revolution in 1848 because there was no popular desire for revolution. The majority feared such disorder and saw it as a dangerous and risky situation to get into. Britain had already had its revolution and had a parliamentary system installed; as a result of that the government could provide change when finally pushed to do so. Grey's clever strategy for splitting the middle classes in order to reduce their participation in radical politics had worked. The continental revolutions, despite creating much anxiety over the possibility of revolution, actually served to divert attention away from national parliamentary reform. Lastly, to succeed the movement needed to have staunch support in London but the working class in London failed to turn out en masse for the Kennington common demonstration. Conditions were different in London to those in the new industrial cities. If revolution was expected to come from discontent owing to industrial change that discontent was not strong enough in London as Rowe comments 'London had no united grievance'15. Had people been short of basic essential food and shelter the story may have been different but as it was conditions were not bad enough to provoke a violent response. ...read more.