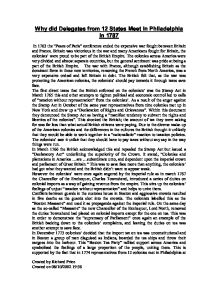 Why did Delegates from 12 States Meet in Philadelphia in 1787

Why did Delegates from 12 States Meet in Philadelphia in 1787 In 1763 the "Peace of Paris" conference ended the expensive war fought between Britain and France. Britain was victorious in the war and many Americans fought for Britain, the colonists' were proud to be part of the British Empire. The colonies across America were very divided and almost separate countries, but the general sentiment was pride at being a part of the British Empire. The war with France, although establishing Britain as the dominant force in these new territories, removing the French from North America, was a very expensive ordeal and left Britain in debt. The British felt that, as the war was protecting the American colonies, the colonists' should pay towards it through taxes save face. The first direct taxes that the British enforced on the colonists' was the Stamp Act in March 1765 this and other attempts to tighten political and economic control led to calls of "taxation without representation" from the colonists'. ...read more.

The colonists labelled this as the "Boston Massacre" and used it as propaganda against the imperial rule. On the same day as the so-called "Massacre" the new Chancellor of the Exchequer, Lord North, removed the duties Townshend had placed on colonial imports except for the one on tea. This was in order to demonstrate the "supremacy of Parliament" once again an example of the British backing down to the colonists' complaints, and leaving the duties on tea was another attempt to save face. In December 1773 colonists' decided that the import tax on tea was unconstitutional and in Boston a group of men disguised as Indians, boarded the tea ships and threw their cargoes into the harbour. This "Boston Tea Party" rallied support across America and symbolised the feelings of a large proportion of the people, uniting them. This is supported by the fact that in 1774 representatives from 12 colonies met in Philadelphia at the "Continental Congress" and denied that they were subject to the authority of British Parliament, though not denying the supremacy of the Crown. ...read more.

It was feared that with a weak central government the states would be picked off one by one by the European powers in the area and their fight ffor independence would have been in vain. The diversity of laws and taxes between states made trade difficult and was not economically sound. So in September 1786, The Annapolis Convention was held with five states being represented, calling for a general convention to be held to address the current problems, American businesses were failing because of competition from foreign imports and debt ridden states were forced to heavily tax hard pressed farmers resulting in revolts. In the Annapolis convention Hamilton (a young lawyer who called for and wrote the resulting notes from the convention) does not discuss any of the specific problems with the weaknesses in the central government so as not to deter any States from attending the Philadelphia Convention. He emphasizes the importance of the Philadelphia Convention by repeating what he says 3 times On May 14 1787 the Philadelphia convention opened, with the purpose to revise the Articles of Confederation in order to strengthen the central government. Created by Richard Price Created on 08/10/2002 19:36 ...read more.