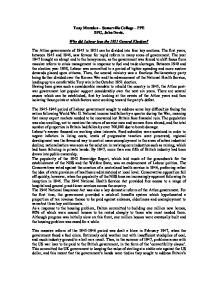 Why did Labour lose the 1951 General Election?

Tony Marsden - Somerville College - PPE BPG, John Davis. Why did Labour lose the 1951 General Election? The Attlee governments of 1945 to 1951 can be divided into four key sections. The first years, between 1945 and 1946, saw fervour for rapid reform in many areas of government. The year 1947 brought an abrupt end to the honeymoon, as the government was forced to shift focus from massive reform to crisis management in response to fuel and trade shortages. Between 1948 and the election year 1950, Labour was committed to a period of tighter spending and more austere demands placed upon citizens. Then, the second ministry saw a fractious Parliamentary party being further divided over the Korean War and the advancement of the National Health Service, leading up to a comfortable Tory win in the October 1951 election. Having been given such a considerable mandate to rebuild the country in 1945, the Attlee post-war government lost popular support considerably over the next six years. There are several causes which can be established, first by looking at the events of the Attlee years and then isolating those points at which factors were working toward the party's defeat. The 1945-1946 period of Labour government sought to address some key difficulties facing the nation following World War II. ...read more.

The new Chancellor Sir Stafford Cripps expected of the country an austere realism which entailed the retention of rationing. His frugality extended to his welfare policies, which involved the further tightening of benefit payments. Both of these policies were unpopular amongst the mass electorate, and rationing caused consternation most notably the middle class, to whom the need for wartime prudence was no longer apparent. It is at this point that the switch from socialist idealism to pragmatic consolidation might be identified as a cause of voter disaffection. In spite of some successes during 1948, including good export figures, participation in the Berlin Airlift and - regardless of middle class perceptions - generous relaxations in rationing, the public's faith in the Attlee government to manage the rebuilding of Britain had dropped off considerably. The Conservative Party made some political headway by attacking the government's credentials with regard to the 1948 devaluation of the pound, which was designed to bring about the much needed rise in exports. Although it did help to achieve this end, Churchill's party was able to lament publicly the humiliation the government had brought upon the British currency, and at the same time place blame on the government for the continuing food scarcities and long queues. So, at the 1950 election there was a 2.9% swing against Labour. ...read more.

Firstly, the party enacted most of its initial 1945 manifesto pledges in establishing the NHS, founding the Welfare State, and building one million new homes. With an inadequate sense of self-renewal, the Attlee era party had little further to put before voters after 1947. This is especially so when one considers the crises they faced in that year, making the 1945 blue-skies, 'New Jerusalem' thinking incredibly difficult to sustain. Rather, the balance of payments problem forced the non-idealists within the leadership to face the necessary curtailing of public spending. This brought about a little unrest within working class support but it was the effect on middle class attitudes and the cracks opening among the Parliamentary party's support which began to harm electoral credibility. Then, as the Cripps years failed to bring an end to food scarcities and food queues, Labour's perceived impact upon the national way of life was minimal to voters in the most crucial swinging constituencies. Furthermore, an apparently humiliating trade policy including subservience to US demands was particularly discrediting in the eyes of post-colonialists who identified this as betrayal rather than pragmatism. Finally, splits over the Korean War - both over the political justifications for British deployment, and over the cuts in public spending domestically - brought about splits in the party which made it poorly placed to fight the 1951 election. ...read more.