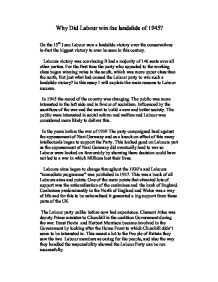 Why Did Labour win the landslide of 1945?

Why Did Labour win the landslide of 1945? On the 15th June Labour won a landslide victory over the conservatives in-fact the biggest victory to ever be seen in this century. Labours victory was convincing It had a majority of 146 seats over all other parties. For the first time the party who appealed to the working class began winning votes in the south, which was more upper class than the north, But just what had caused the Labour party to win such a landslide victory? In this essay I will explain the main reasons to Labour success. In 1945 the mood of the country was changing. The public was more interested in the left side and in favour of socialism. Influenced by the sacrifices of the war and the want to build a new and better society. The public were interested in social reform and welfare and Labour was considered more likely to deliver this. In the years before the war of 1939 The party campaigned hard against the appeasement of Nazi Germany and as a knock on effect of this many intellectuals began to support the Party. ...read more.

The Labour party aims mainly revolved around Reconstruction and the need to get rid of the "5 giants" as Beveridge called them when he published the Beveridge report to which 86% of the public were in favour of. The 5 Giants were Want, Disease, Ignorance, Squalor and Idleness. The conservative ignorance and arrogance played a part in Labour's comprehensive win. They believed that Churchill would instantly be voted back into Government on the fact he dragged Britain through the war. His campaign was "let me finish what I have started" The conservative didn't campaign as hard as they could have done because of this arrogance. In contrast Labour had a very clear idea of Post-war world that it wanted to create. In an election broadcast Clement Atlee, the party leader argued "we have to plan the broad lines of our national life so that all may have the duty and opportunity to rendering service to the nation. . . and that all may help to create and share an increasing material prosperity free from the fear of want" Michael Foot told a very good speech to voters in Plymouth that caught ...read more.

These are all reasons that contributed to the success of the Labour Landslide in 1945 with the main emphasis on social reform the public was always going to support the Labour party compared to a lacklustre campaign by the Tory party. NHS played a great role in the success of the Labour Government. It completely changed peoples health and how they took cared of there selves. It was social reform and its greatest which is what Britain wanted and this coincided with the experienced Clement atlles had from the war as well as Bevin and Morrison as Labour became a forced to be reckoned with. In conclusion I believed due to the conservatives believing they had already won the election before they started set the way for Labour who worked tirelessly in their promotional campaign to sneak in and steal a victory. Even they themselves were surprised with the results were Labour gained a massive advantage over seats than any other party. The NHS completely rejuvenated the social reform which was starting to take place post war. LIAM HAYES . ...read more.