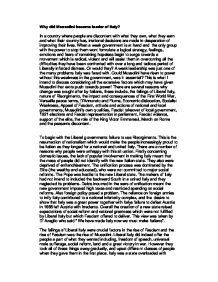 Why did Mussolini become leader of

Why did Mussolini become leader of Italy? In a country where people are discontent with what they own, what they earn and what their country has, irrational decisions are made in desperation of improving their lives. When a weak government is at hand and the only group with the power to stop them wont formulate a logical strategy, feelings, emotions and fears of remaining hopeless begin to surge towards a movement which is radical, violent and will assist them in overcoming all the difficulties they have been confronted with over a long and tedious period of Liberally inforced distress. Or would they? A weak leadership was just one of the many problems Italy was faced with. Could Mussolini have risen to power without this weakness in the government, was it essential? This is what I intend to discuss considering all the extensive factors which may have given Mussolini that extra push towards power! There are several reasons why change was sought after by Italians, these include, the failings of Liberal Italy, nature of Risorgimento, the impact and consequences of the First World War, Versaille peace terms, D'Annunzio and Fiume, Economic dislocation, Socialist Weakness, Appeal of Fascism, attitude and actions of national and local governments, Mussolini's own qualities, Fascist takeover of local government, 1921 elections and Fascist representation in parliament, Fascist violence, support of the elite, the role of the King Victor Emmaneul, March on Rome and the peasants discontent. ...read more.

she could only support her war effort by obtaining foreign loans. Immediately after the war, as Europe was exausted by the war, the Italian tourist trade and export trade came to a stand still and there was large-scale unemployment throughout the country. The problem of unemploment was aggravated by the return of millions of ex-soldiers to Italy and a new immigration law of the U.S government which restricted entry of immigrants. Moreover runaway inflation added to the suffereings of the Italians. The Lira had only one-fifth of its pre-war value. Encouraged by the success of the Bolshevik revoltuion in 1917, the unemployed workers and peasants stirred up riots and strikes throughout the country. All these issues only made Liberal Italy and the minuite bit of power it had left grow smaller and smaller, while Fascism grew stronger and the desperate peasants began to reach for anything they could that would boost their spirits, and had the government been stronger the groups such as the Fascists would have ahd no support, no reason and therefore they could not overthrow as easily as they did. And because of their weakness I believe this situation was the least threatening to the Fascists. Opposing my argument for the least threat is my argument fo the greatest threat to Fascism and Musolini, which is without a doubt was D'Annunzio. Although he did not seem to be the most poplular man in Italy at this time, the socialists were getting the votes. ...read more.

The petite bourgouise supported them because they would benefit slighly from their ideals, whereas the ideals of other movements would hinder them. The authorities showed their support for Fascism by coverning up for them whenever they created violence with the socialists as the authorities, espicially the police were very anti-socialism. The Futurists supported them because futrurism was the basis of Fascism. The ras supported Mussolini not Fascism because they saw him as a strong leader. The King asupported bacsue he was weak and indecisive. The church would be pro- fascism because it was the best way to stop socialits from telling people that religion is the "optimujm of the masses". The ex-soldiers simply wanted violence. Mussolini's own character describes perfectly how he rose with Fascism. I believe Mussolini is Fascism. His strategies, his ways, his beleifs, his thoughts, his weaknesses, his power, his spoilt personality, his ability to reach every target he ever had and always come out of situations with what he went in intending to get!! In conclusion and after surveying all the evidence I believe Mussolini came to power not because of his ability to rule but because of Fascisms ability to rule. Fascism being a cocktail can mix everyones needs in to one therefore it can satisfy everyone and those people who are'nt satisfied can just be added in!! Who would'nt vote for a ruler who can give them what they want? I believe Mussolini was Fascism. I believ ascism can indeed be defined with one simple word! MUSSOLINI. he became leader because Fascism became a leader ...read more.