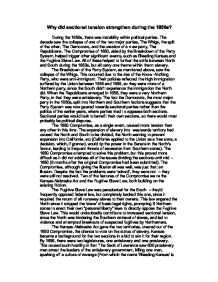 Why did sectional tension strengthen during the 1850s?

Why did sectional tension strengthen during the 1850s? During the 1850s, there was instability within political parties. The decade saw the collapse of one of the two major parties, The Whigs, the split of the other, The Democrats, and the creation of a new party, The Republicans. The Compromise of 1850, aided by the Breakdown of the Party System, helped trigger other significant events, such as Bleeding Kansas and the Fugitive Slave Law. All of these helped to further the strife between North and South during the 1850s, but all carry one theme within them: slavery. The Breakdown of the Party System, as mentioned above, saw the collapse of the Whigs. This occurred due to the rise of the Know-Nothing Party, who were anti-immigrant. Their policies reflected the high immigration suffered by the Union between 1846 and 1855, so they were more of a Northern party, since the South didn't experience the immigration the North did. ...read more.

The 1850 Compromise attempted to solve this problem, but this proved more difficult as it did not address all of the issues dividing the sections until mid-1850 (8 months after the original Compromise had been submitted). The Compromise, although giving the illusion all was well, was just that: an illusion. Despite the fact the problems were 'solved', they were not - they were still not resolved. Two of the features of the Compromise were the Kansas-Nebraska Act and the Fugitive Slave Law, both building on the existing friction. The Fugitive Slave Law was paradoxical for the South - they'd frequently opposed federal law, but completely backed this one, since it required the return of all runaway slaves to their owners. This law angered the North since it stripped the 'slave' of basic legal rights, prompting 8 Northern states to enact their own "personal liberty" laws to directly oppose the Fugitive Slave Law. ...read more.

attacks by both sides. The guerrilla warfare left 200 dead; the fact people were being killed suggests the tension between the two sections was being tipped over the edge. The one theme behind all of the events of the 1850s is that of slavery. It was the main division between North and South, and was nonnegotiable. Neither side would back down on their stance, and there was no middle ground. Therefore, even if their other differences could be resolved, the issue of slavery would still be there, so much so that John Brown attempted a slave insurrection at Harper's Ferry in 1859, his suicidal plan getting him executed in December the same year. Thus, although there were numerous events that occurred that helped strengthen the tension between the sections, the issue of slavery links them all together, and so we can say that differences over slavery was the main reason why the hostility between North and South became so heated. ...read more.