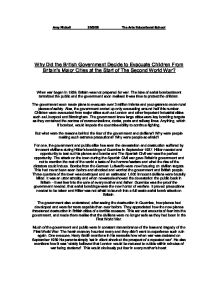 Why Did the British Government Decide to Evacuate Children From Britain's Major Cities at the Start of The Second World War?

Amy Nickell 28/2/06 The Arts Educational School Why Did the British Government Decide to Evacuate Children From Britain's Major Cities at the Start of The Second World War? When war began in 1939, Britain was not prepared for war. The idea of aerial bombardment terrorized the public and the government soon realised it was time to protect the children. The government soon made plans to evacuate over 3 million infants and youngsters to more rural places of safety. Alas, the government ended up only evacuating around half this number. Children were evacuated from major cities such as London and other important industrial cities such as Liverpool and Birmingham. The government knew large cities were key bombing targets as they contained the centres of communications, docks, ports and railway lines. Anything, which if bombed, would impede the countries ability to continue fighting. But what were the reasons behind the fear of the government and civilians? Why were people making such extreme precautions? Why were people so afraid? For one, the government and public alike has seen the devastation and destruction suffered by innocent civilians during Hitler's bombings of Guernica in September 1937. Hitler needed and opportunity to test out his planes and bombs and The Spanish Civil war was the perfect opportunity. The attack on the town during the Spanish Civil war gave Britain's government and not to mention the rest of the world a taste of the horrors fascism and what the rise of the dictators could induce. ...read more.

After the collapse and the failure of the Disarmament Conference in 1934, along with the failure of the League of Nations people were beginning to be frightened. After the rise of Hitler in 1933, people saw how powerful Hitler was. In 1938 he was making speeches that spoke of sending the re formed German army into Czechoslovakia. Hitler also made claims that the German Luftwaffe was now great again and equal, if not superior, to that of the RAF. The British government now felt the looming war more than ever. The public and government saw how quickly and efficiently Germany had rearmed and it frightened many and forced them to question what else Germany would be capable of and take necessary safety measures. Precautions were taken as early as 1924 the government was making moves against air raids. To be prepared did Britain ever get forced into war, they built air raid shelters. They government felt the need to prepare in such ways as it had experienced over 103 raids on Britain from her enemy. Fifty one of these were performed by Airships, mainly on London. 300 tons of bombs were dropped killing 1413 people. This use of bombs loiter on peoples minds and caused people to fear of worse things to come. When it was widely believed gas would be used as a form of attack the government tried to persuade the public to install 'refuge rooms' into there house. ...read more.

The government had learnt during ww1 how vital the women were to the success of the war and the home front. They were needed in the cities to complete the tasks and jobs of the men who were away fighting on the front line. The government also understood what a nuisance looking after the children would be to the women. The government appreciated that sending them away, would not only put them in secure safety. It would also be beneficial to the women. The government saw how it could also increase the working standard and efficiency of the working women. The government also recognized how high child casualties would affect the countries morale. They saw how it would lower morale and increase a hatred for the war. It would dampen the spirits of soldiers who believed they were fighting for a new generation. Just before war was declared the government finally decided to take action and begin moving children from there homes. They did this to avoid a mass evacuation that would be panicked and not efficient. People were initially reluctant and only 47% of children were evacuated. When the expected bombings did not occur in 1939 around 1 million evacuees returned to the cities. However, in 1940 the Luftwaffe began bombing and another evacuation took place. By the 7th of September the Luftwaffe was bombing cities such as Liverpool and Plymouth, Birmingham and Coventry. Parents were now desperate to get there children out of these target zones and by December 1941 over 1,250,000, children had left the cities. http://www.worldwar2exraf.co.uk/Online%20Museum/Museum%20Docs/airraidshelters.html http://www.johndclare.net/EL6.htm www.worldwar2exraf.co.uk/Online%20Museum/ Museum%20Docs/airraidshelters.html ...read more.