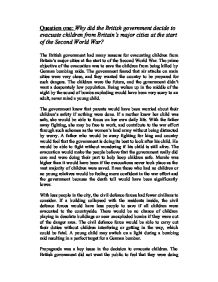 Why did the British government decide to evacuate children from Britain's major cities at the start of the Second World War?

The evacuation would make the people believe that the government really did care and were doing their part to help keep children safe. Morale was higher than it would have been if the evacuations never took place as the vast majority of children were saved. Even those who had no children or no young relatives would be feeling more confident in the war effort and the government because the death toll would have been significantly lower. With less people in the city, the civil defence forces had fewer civilians to consider. If a building collapsed with the residents inside, the civil defence forces would have less people to save if all children were evacuated to the countryside. ...read more.

To keep morale high the government had to keep the people happy. The British government used the evacuations for propaganda purposes, saying what a caring government they were and how they were saving British children. If they had not evacuated the children, the Germans could have claimed that the British government was incompetent, and did not care for the children dying in the bombing raids. Such propaganda would have badly damaged British morale and support for the government. I think that the government was right in evacuating children. They were correct in thinking that the Germans would bomb major British cities, despite beliefs of the public that it was only a 'Phoney war'. The evacuation was very helpful to the war effort and saved many innocent lives. Word count: 575 ...read more.