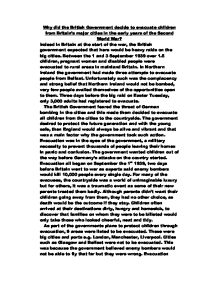 Why did the British Government decide to evacuate children from Britain's major cities in the early years of the Second World War?

Why did the British Government decide to evacuate children from Britain's major cities in the early years of the Second World War? Indeed in Britain at the start of the war, the British government expected that here would be heavy raids on the big cities. Between the 1 and 3 September 1939 over 1.5 children, pregnant women and disabled people were evacuated to rural areas in mainland Britain. In Northern Ireland the government had made three attempts to evacuate people from Belfast. Unfortunately such was the complacency and strong belief that Northern Ireland would not be bombed, very few people availed themselves of the opportunities open to them. Three days before the big raid on Easter Tuesday, only 3,000 adults had registered to evacuate. The British Government feared the threat of German bombing in the cities and this made them decided to evacuate all children from the cities to the countryside. ...read more.

Although parents didn't want their children going away from them, they had no other choice, as death would be the outcome if they stay. Children often arrived at their destinations dirty, hungry and homesick, to discover that families on whom they were to be billeted would only take those who looked cheerful, neat and tidy. As part of the governments plans to protect children through evacuation, 9 areas were listed to be evacuated. These were big cities and ports e.g. London, Manchester, Liverpool. Cities such as Glasgow and Belfast were not to be evacuated. This was because the government believed enemy bombers would not be able to fly that far but they were wrong. Evacuation certainly provided relatively safe homes for Britain's wartime children as the country's cities experienced heavy bombing by the German Luftwaffe. ...read more.

Britain needed to have more weapons in order to defend themselves and that was exactly what happened during the period of evacuation. More and more parents had much more time to do war work like working in the ammunitions, which contributed very much to the war effort. Source D states the government's desire to take children out of the 'danger zone-where desperate peril may come at any minute'. Therefore protection. The government wasn't being pushed to enforce evacuation. They did it through their own desire to protect the future generation. This same source also states how children will be 'healthier and happier'. Whilst not a principal reason, cold be a minor factor. Although parents didn't like the idea, the government saw it as the only priorities, which in the end, helped, save lots of young lives. The government showed how committed and caring they were for the children and not only the children but the older generation as well. Anthony .A. Abladey 11 W d ...read more.