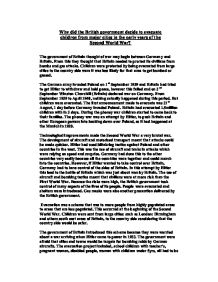 Why did the British government decide to evacuate children from major cities in the early years of the Second World War?

Why did the British government decide to evacuate children from major cities in the early years of the Second World War? The government of Britain thought of war may begin between Germany and Britain. From this they thought that Britain needed to protect its civilians from bombs and gas attacks. Children were protected by being evacuated from large cities to the country side were it was less likely for that area to get bombed or gassed. The German army invaded Poland on 1st September 1939 and Britain had tried to get Hitler to withdraw and hold peace, however this failed and on 3rd September Winston Churchill (Britain) declared war on Germany. From September 1939 to April 1940, nothing actually happened during this period. But children were evacuated. The first announcement made to evacuate was 31st August, 1 day before Germany invaded Poland. Britain had evacuated 1.5million children with in 3 days. During the phoney war children started to come back to their families. The phoney war was an attempt by Hitler, to push Britain and other European powers into backing down over Poland, as it had happened at the Munich in 1938. Technological improvements made the Second World War a very brutal war. The development of aircraft and motorised transport meant that attacks could be made quicker. Hitler had used blitzkrieg tactics against Poland and other countries in the west. This was the use of aircraft and tanks in attacks which were relying on speed and surprise. ...read more.

Later in 1944 when Germany begins a new wave of bombing tactics, V1 bombs and V2 rockets were introduced. The change of tactics by Germany caused the British government to decide that another evacuation should take place and it does. This was the last of the evacuation in Britain and this scheme saved thousands of civilian's lives. The government had been over exaggerating about the consequences of the war or what they should do about the war. They were especially exaggerating about the bombing raids by Germany. The British government had planned to have evacuated 3 million people within the first 4 days of the Second World War. However, the British government only managed to evacuate half the amount of they had planned, only 1.5 million in 3 days. This was a huge difference between the estimate and the amount of people that were actually evacuated. From this it can be seen that the British government was under suspicion of getting bombed heavily within the first few days of the Second World War. The British government was also afraid of gas attacks so every citizen had to have been given a gas mask in order to be protected by this attack. The government had supplied over 38million gas masks all round he country. Most of these were supplied to the people that lived in highly populated areas such as London and Birmingham and also the evacuees even though they were going to a safe area where it was less likely to get bombed or gassed. ...read more.

Industrial targets, such as motor works and aero-engine factories got destroyed. The bombers also destroyed the city's cathedral which shows the hard heartiness of Germany. This gave a chance to the British government to use this as an example of propaganda at the beginning of the war the government was expecting to get attacked from the air and then took precautions to protect its people. Air raid wardens were appointed to make sure the black out was being followed properly and to prepare people for air raids. When air raids occurred the air raid wardens would let the people know it was coming air raid sirens would go off. When they heard the siren they would go outside the house into another shelter. Anderson shelters were most common but some preferred other places. An Anderson shelter was big enough to fit a whole family in. at the end of the blitz, the summer of 1941, about 43 000 people had died and millions left homeless. To conclude, I think that the government chose the right scheme at the right time to save tens of thousands of lives. Evacuation was introduced by the government because they thought it would be safe for the civilians of Britain. Also, because they thought that Germany would attack Britain by bombs and gas attacks. This meant that the people of Britain were in danger if evacuation wasn't established. So the children, teachers, mothers and disabled people were evacuated to safer places all around Britain. ?? ?? ?? ?? ...read more.