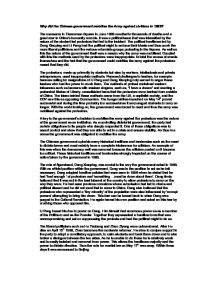 Why did the Chinese government mobilise the Army against civilians in 1989?

Why did the Chinese government mobilise the Army against civilians in 1989? The massacre in Tiananmen Square in June 1989 resulted in thousands of deaths and a great scar in China's humanity records. It was a political issue that was intensified by the nature of the student led protestors that led to the incident. The political hardliners led by Deng Xiaoping and Li Peng had the political might to enforce their ideals and thus crush the more liberal politicians and the various reformists groups protesting in the Square. As well as this the nature of the government itself was a reason why the army was mobilised. Coupled with this the methods used by the protestors were inappropriate. In total the course of events themselves and the fact that the government could mobilise the army against the protestors meant that they did. The protestors, made up primarily by students but also by workers, intellectuals and private entrepreneurs, used inappropriate methods. Personal challenges to leaders, for example banners calling for resignations of Li Peng and Deng Xiaoping only served to anger these leaders who had the power to crush them. ...read more.

The Chinese government upholds many historical traditions and tendencies such as the need to dictate terms and most notably have a complete intolerance for criticism. An example of this was when the democracy wall was removed because the criticism posted on it became too critical. These historical traditions and tendencies strongly impacted on the course of action taken by the government in 1989. The role of figurehead, Deng Xiaoping, was crucial to the way the government acted in 1989. With no official position within the government, Deng was in the position to act as he felt necessary. Deng adopted hardline policies that were seen in 1986 when he stated that he had 'had enough ' of protestors and 'something ...must be done about them'. Deng firmly believed that it was not in the best interest of the country to allow protestors to carry on the way they were. He had seen previous occasions where submission had led to chaos and political dissent and he did not want that to occur in China. ...read more.

Within three days it was announced to Beijing. The simple reason that the government could mobilise the army against the protestors meant they did. It seemed that the hard line leaders wanted a violent end as water canons and tear gas would have dispersed the protestors. The mess that surrounded Beijing and the disruption involved was labelled as circus like by one politician. Alleged attacks on PLA soldiers by students gave somewhat justification for violent suppression. Importantly, the switching off of the media allowed much more control and freedom of violence to enforce the will of the government. Also the fact that most Chinese did not know what was happening in the Square. These events allowed the hard liners to enforce their aims and policies. For their two-month defiance of the government, the protestors were to be made to atone in death. The resort to tanks and bullets was intended to impress upon the Chinese both the seriousness of the demonstrators' challenge to civil order and the determination of the government not to tolerate such rebellion. The massacre in Tiananmen Square was very much in the Chinese tradition of crushing opposition by the severest means in order to emphasise the illegitimacy of opposition itself. ...read more.