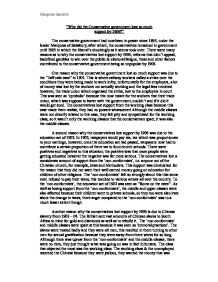 &quot;Why did the Conservative government lose so much support by 1906?&quot;

Before this act had passed, pubs could be set-up virtually anywhere. The 'licensing act of 1904' stops this because the conservative government thinks that 'drinking isn't good', pubs were then chosen at random and told to shut down. This resulted in workers being unemployed and breweries having less demand, i.e. losing money. The conservatives have always been known to help people that vote for them, so due to loss of earnings, the breweries get compensation which of course is actually compensated by tax. Almost every group in society was livid over this. The working class were upset because they often went for casual drinks, whereas now they couldn't, the pub owners were also very upset because there business and livelihood had been shut down. The 'non-conformists' were also very upset because they thought alcohol was the root of all evil so for them to pay tax for the breweries' compensation was just ludicrous. The middle and upper classes always drank at home so they were also upset because they now had to pay tax to the breweries which they never used. The general feeling by 1904 was that most groups in society thought the conservative government was a shambles. ...read more.

All these factors as well as others contributed to the loss of support for the conservative party. In addition, 'non-conformists' by 1906 also had no support for the conservative party due to 'Rome rates', the immoral practices due to Chinese slavery and the fact that their taxes were to be paid to breweries! In my opinion, the 'Tariff reform proposals' were the tip of the iceberg, many people resented the proposals and it caused much discontent amongst all classes. As well as these factors, there was a feeling of 'electoral fatigue' amongst the voters, the conservatives had been in power for over 10 years, people wanted change! The lib-lab pact ensured the liberals would get more seats in the house of commons. The election campaigns in which there was a significant poster that showed a large loaf of bread under the liberals and with the same amount of money, a small loaf under the conservatives. Balfour's personality can also be contributed to the unstableness of the conservative government, it could in fact be argued that Balfour was useless from the start, after all he didn't have any political experience! Manpreet Sambhi ...read more.