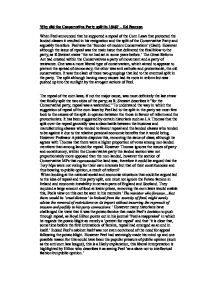 Why did the Conservative Party split in 1846? - Ed Pearson When Peel announced that he supported a repeal of the Corn Laws that protected the landed classes it

Why did the Conservative Party split in 1846? - Ed Pearson When Peel announced that he supported a repeal of the Corn Laws that protected the landed classes it resulted in his resignation and the split of the Conservative Party and arguably therefore Peel was the 'founder of modern Conservatism' (Gash). However although the issue of repeal was the main issue that delivered the final blow to the party, as R Stewart states 'the rot had set in some years before.' The Great Reform Act had created within the Conservatives a party of movement and a party of resistance. One was a more liberal type of conservatism, which aimed to appease to prevent the spread of democracy; the other was anti catholic and protectionist, the old conservatism. It was the clash of these two groupings that led to the eventual split in the party. The split although having many causes had its roots in reform but was pushed up into the sunlight by the arrogant actions of Peel. The repeal of the corn laws, if not the major cause, was most definitely the last straw that finally split the two sides of the party; as R. Stewart describes it "for the Conservative party, repeal was a watershed." To understand the way in which the suggestion of repeal of the corn laws by Peel led to the split in the party we must first look to the causes of the split in opinion between the those in favour of reform and the protectionists. ...read more.

Therefore the extent of Peel's 'betrayal' and the extent to which he is to blame may be bought into question, although the fact remains that Peel had publicly announced his support of the Corn Laws. As for the argument that Peel ignored his backbenchers thus causing substantial tension and eventual split; Stewart argues that since the days of Pitt there had been strain within the party between the business men of the cabinet and the squires of the backbenches. Perhaps then Peels arrogance towards the backbenchers was nothing out of the ordinary and we should be careful about how much blame we place on Peel. However Gash makes the important point that in the days of Pitt he could afford major defeats as he had the crown to fall back upon, but by the time of Peel parliament had far more authority in making the controversial administrative decisions and therefore Peel needed the support of his party. Perhaps if Peel's actions and attitude towards the repeal of Corn Laws had been the only way in which he acted slightly tyrannically, as some of protectionists described his actions, then the party may not have become so unstable; however it was not. The other major issue in which Peel's decisions contributed significantly to the split in the Tory party was the way in which he handled the situation of Catholicism and Ireland; Once again the backbenchers were left unconsulted and their opinions ignored. There was a certain tradition within the Conservative party of anti-Catholicism and attacks on the Irish, Catholicism was seen by the ...read more.

split in the conservative party or was it in fact a well thought out adaptation to the constitution to prevent revolution and protect the landed classes? Peel was an opportunist, a number of historians agree with this view such as Anna Ramsay, however Peel's great weakness was his arrogance and failure to see future consequences of his actions made him the solely most important factor in the split of the Conservative party. The way In which he acted was at times despotic even tyrannical, not only on the issues of corn and Ireland but on numerous other occasions such as the attempt by parliament to reduce the working hours in factories, the act was passed but Peel threatened to resign and thus the act was reversed. Peel could have and did get away with acting in this way many a number of times but his failure was that he did not know when to stop his ever increasing liberal actions that to his colleagues on the backbenches smacked of democracy. Peel and the liberal Tories were children of the reform of parliament, the reformed Tories, the problem was that the rest of the party took a reactionary approach to the reform act, one that Peel foolishly thought he could ignore. Would the Conservative party have split without then potato famine and other economic factors leading up to the repeal? Yes, would it have split without the actions of Peel? Eventually yes, as rot had already set in before Peel came to office but it is unlikely it would have happened so soon. ...read more.