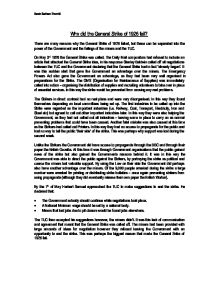 Why did the General Strike of 1926 fail?

Railway, Coal, Transport, Electricity, Iron and Steel etc) but agreed to call out other important industries later. In this way they were also helping the Government, as they had not called out all industries - leaving some in place to carry on as normal preventing problems that could have been caused. Another fatal mistake was also caused at this time as the Strikers had called out Printers. In this way they had no access to propaganda for the public and had no way to tell the public 'their side' of the strike. This was perhaps why support was lost during the second week. Unlike the Strikers the Government did have access to propaganda through the BBC and through their paper the British Gazette. ...read more.

By the 7th of May Herbert Samuel approached the TUC to make suggestions to end the strike. He declared that: * The Government subsidy should continue while negotiations took place. * A National Minimum wage should be set by a national body. * Miners that lost jobs due to pit closure would be found jobs elsewhere. The TUC then accepted his suggestions however, the miners didn't. It was this lack of communication and agreement that meant that the General Strike was called off. The miners had been provided with large amounts of ideas for negotiation however they refused leaving the Government with an opportunity to end the strike. This was perhaps the biggest reason that made the General Strike of 1926 fail. ?? ?? ?? ?? Sarah Badham-Thornhill ...read more.