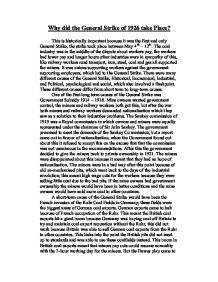 Why did the General Strike of 1926 take Place?

Why did the General Strike of 1926 take Place? This is historically important because it was the first and only General Strike, the strike took place between May 4th - 12th. The coal industry was in the middle of the dispute about workers pay, the workers had lower pay and longer hours other industries were in sympathy of this, like railway workers road transport, iron, steel, coal and gas all supported the miners. It was unions supporting workers against the government supporting employers, which led to the General Strike. There were many different causes of the General Strike, Historical, Economical, Industrial, and Political, psychological and social, which also involved a flashpoint. These different causes differ from short term to long-term causes. One of the first long term causes of the General Strike was Government Subsidy 1914 - 1918. Mine owners wanted government control, the miners and railway workers both got this, but after the war both miners and railway workers demanded nationalisation which they saw as a solution to their industries problems. ...read more.

If the mine owners had government ownership the miners would have been in better conditions and the mine owners would have sold more coal to other countries. A short-term cause of the General Strike would have been the French invasion of the Ruhr Coal Fields in Germany; these fields were the biggest areas of German coal exports. German exports came to halt because of French occupation of the Ruhr. This meant the British coal exports hit a giant boom because Germany was buying coal off Britain to try and maintain coal export reputation without the Ruhr, this did not work because Britain was able to sell German coal exports from the Ruhr to other countries. This links into the point the British pits did not meet up to standards and was able to use these coalfields instead. This boom in British coal exports meant that minors pay cuts could resume normality with the 7-hour working day for the miners. ...read more.

The syndicalism failed after tried out so railway men industrial workers and the miners formed the triple Alliance this would mean that if one of the unions failed the other worker union would pull out and come on strike as well in an act of sympathy. The OMS for the Government said that if this did happen they would have to set up preparations for dealing with a General Strike, by dividing up into 10 different areas each under control of a civil Commissioner. This would coordinate the work of national and local officials, The big flashpoint to the General Strike would have been that the dailt mail printers did not write the editorial sent in about the strike, thus violating the industrial truce, this caused the unions to go on strike. The miners and other working unions went on strike for 9 days, the Government turned out a second line of workers to deal with the strike, but the TUC had to try and stop these reserved workers from joining the strike. ...read more.