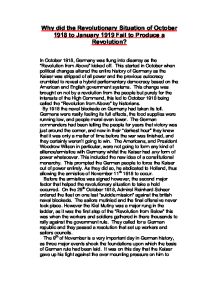 Why did the German revolutionary situation of October 1918 to January 1919 fail to produce a revolution?

Why did the Revolutionary Situation of October 1918 to January 1919 Fail to Produce a Revolution? In October 1918, Germany was flung into disarray as the "Revolution from Above" kicked off. This started in October when political changes altered the entire history of Germany as the Kaiser was stripped of all power and the previous autocracy crumbled to reveal a hybrid parliamentary democracy based on the American and English government systems. This change was brought on not by a revolution from the people but purely for the interests of the High Command, this led to October 1918 being called the "Revolution from Above" by historians. By 1918 the naval blockade on Germany had taken its toll. Germans were really feeling its full effects, the food supplies were running low, and people moral even lower. ...read more.

However the Kiel Mutiny was a major rung in the ladder, as it was the first step of the "Revolution from Below" this was when the workers and soldiers gathered in there thousands to rally against the government rule. They called for a German republic and they passed a resolution that set up workers and sailors councils. The 9th of November is a very important day in German history, as three major events shook the foundations upon which the basis of German rule had been laid. It was on this day that the Kaiser gave up his fight against the ever mounting pressure on him to leave, and he fled to Holland. On the same day, Prince Max's five week old party government was the second victim. As his government system collapsed, he appointed Freidrich Ebert to succeed him. ...read more.

However, on the 6th of January, the spartacists rose up against the December Congress. They occupied newspaper offices, government buildings and railway stations. The leaders of the Spartacus League, or German Communist Party, were Karl Liebknecht and Rosa Luxemburg, they recognized the fact that the Spartacists were too few to take power but had been spurred into action because they felt that the time for a revolution was slipping away, and when the revolt started they worked endlessly for its success. This uprising lasted until the 11th of January, when the Freikorps were called in by the Government to route them out. Therefore in my opinion, by looking at the evidence we can see that the revolutionary situation of October 1918 to January 1919 didn't become a revolution because those who wished to bring the revolution about, the Spartacists and the USPD, were not prepared for combat which they experienced when the freikorps came in. Also, their numbers were too few in order to overcome the army and overthrow the government. ...read more.