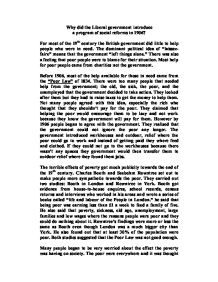 Why did the Liberal government introduce a program of social reforms in 1906?

Why did the Liberal government introduce a program of social reforms in 1906? For most of the 19th century the British government did little to help people who were in need. The dominant political idea of "laissez-faire" means that the government "left things alone." There was also a feeling that poor people were to blame for their situation. Most help for poor people came from charities not the government. Before 1906, most of the help available for those in need came from the "Poor Law" of 1834. There were too many people that needed help from the government; the old, the sick, the poor, and the unemployed that the government decided to take action. They looked after them but they had to raise taxes to get the money to help them. ...read more.

If they could not go to the workhouses because there wasn't any spaces they government would then transfer them to outdoor relief where they found them jobs. The terrible effects of poverty got much publicity towards the end of the 19th century. Charles Booth and Seebohm Rowntree set out to make people more sympathetic towards the poor. They carried out two studies: Booth in London and Rowntree in York. Booth got evidence from house-to-house enquires, school records, census returns and interviews who worked in his areas and wrote a series of books called "life and labour of the People in London." he said that being poor was earning less than �1 a week to feed a family of five. ...read more.

The poor were everywhere and it was thought that if nothing was done the poor my rise up in revolution against the government. David Lloyd George says "there are ten millions in this country enduring year after year the torture of living while lacking a sufficiency of the bare necessities in life." He is trying to say that many people are to poor to afford the things we need in life like food, clothes and maybe medicine. He says that England is to rich to let its people starve. The Liberal government introduced a programme of social reform in 1906 because the British society had changed. The industrial revolution meant that most people now lived in towns and cities, and the urban poor were living in terrible conditions people could no longer ignore the terrible effects of poverty and the Liberal government responded to this new concern by the introduction of their social reform programme. ...read more.