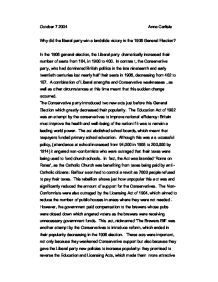 Why did the liberal party win a landslide victory in the 1906 General Election?

October 7 2004 Anna Carlisle Why did the liberal party win a landslide victory in the 1906 General Election? In the 1906 general election, the Liberal party dramatically increased their number of seats from 184, in 1900 to 400. In contrast, the Conservative party, who had dominated British politics in the late nineteenth and early twentieth centuries lost nearly half their seats in 1906, decreasing from 402 to 157. A combination of Liberal strengths and Conservative weaknesses, as well as other circumstances at this time meant that this sudden change occurred. The Conservative party introduced two new acts just before this General Election which greatly decreased their popularity. The Education Act of 1902 was an attempt by the conservatives to improve national efficiency: Britain must improve the health and well-being of the nation if it was to remain a leading world power. The act abolished school boards, which meant that taxpayers funded primary school education. Although this was a successful policy, (attendance at school increased from 94,000 in 1905 to 200,000 by 1914) it angered non-conformists who were outraged that their taxes were being used to fund church schools. In fact, the Act was branded 'Rome on Rates', as the Catholic Church was benefiting from taxes being paid by anti-Catholic citizens: Balfour soon had to control a revolt as 7000 people refused to pay their taxes. ...read more.

This starling revelation led people to question why Britain, an apparently strong nation could produce such a large amount of unhealthy young men. The war also created the scandal of concentration camps: in order to achieve victory, the British army forced citizens into these camps and the poor conditions led to a widespread outbreak of fatal diseases. News of British actions horrified many citizens. Moreover, the Conservatives allowed Chinese labourers to work in South Africa to dig in gold and diamond mines for very low wages. This also appalled the British citizens: many of the working class were scared that Britain may import cheaper, foreign workers, which would make their wages fall. Although these scandals were not major reasons why the Conservatives lost support, they added to other party weaknesses which affected them in the general election. Balfour opposed the 'Chinese slavery' but did nothing to stop it, which only added to the idea that he had a lack of interest in 'the masses.' Additionally, the Conservatives were further criticised for their handling of the Taff Vale crisis in 1901. The Conservatives allowed The Taff Vale Railway Company to sue the Trade Union for loss of income, after workers went on strike. The union were forced to pay �23,000 in compensation and the event made the right to strike practically useless as Trade Unions' powers were decreased. ...read more.

In contrast, the Liberal party had significantly improved their plans since the Conservative victory in 1900. The Liberals took part in a secret deal with the newly established Labour Representation Committee, which greatly increased their number of possible seats. Known as the 'Lib-Lab Pact', they agreed that no liberal candidate would stand if a LRC candidate had a better chance of getting elected. This meant that the combined votes of the Liberal and Labour party would be greater than the number of Conservative seats and they would be defeated: both the Liberal and Labour candidates would campaign for an anti-conservative vote. This pact was certainly a strength of the Liberal party which led to them gaining a land-slide victory in 1906. However, other strengths of the Liberal party, such as campaigning against the Licensing and Education Acts were only evident because the Conservatives had made the mistake of introducing these reforms in the first place. Other Conservative weaknesses such as poor leadership and the split over Tariff reform placed the party at a major disadvantage so the Liberals appeared more attractive, when compared. Overall, although the Liberals did unite together for a number of policies and took part in the Lib-Lab pact to gain support, it seems the Conservative weaknesses played a more important role in the landslide victory as its mistakes gave something to unite the Liberals and the contrast in organisation within the parties made the Liberals more appealing. . ...read more.