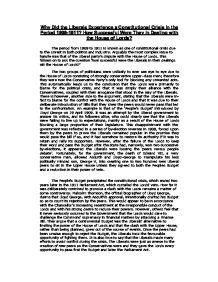 Why Did the Liberals Experience a Constitutional Crisis in the Period 1909-1911? How Successful Were They in Dealing with the House of Lords?

Why Did the Liberals Experience a Constitutional Crisis in the Period 1909-1911? How Successful Were They in Dealing with the House of Lords? The period from 1909 to 1911 is known as one of constitutional crisis due to the unrest in both politics and industry. Arguably the most complex issue to handle was that of the Liberal party's dispute with the House of Lords. This follows on to ask the question 'how successful were the Liberals in their dealings wit the House of Lords?' The two groups of politicians were unlikely to ever see eye to eye due to the House of Lords consisting of strongly conservative upper-class men; therefore they were now the Conservative Party's only tool for blocking any unwanted acts. This automatically leads us to the conclusion that the Lords were primarily to blame for the political crisis, and that it was simply their alliance with the Conservatives, coupled with their arrogance that stood in the way of the Liberals. There is however, another side to the argument, stating that the Liberals were in-fact to blame for the conflict with the House of Lords and that it was due to their deliberate introduction of Bills that they knew the peers would never pass that led to the confrontation. An example is that of the 'People's Budget' introduced by Lloyd George on 29 April 1909. ...read more.

union recognition. When disputes began to move into the work areas of other industries as well, the public became alarmed not only by the extent of strike action but also, in the words of a recent historian, by its 'violent, unofficial and insurgent character'. It would appear that the fundamental causes for such unrest were economic. The cost of living had risen by some four or five per cent between 1902 and 1908, and by a further eight points between 1909 and 1913. The rise in money wages had kept pace between 1902 and 1908, but had lagged behind between 1909 and 1913. Thus the pressure on trade unions to seek wage increases was correspondingly greater. Moreover, the rise in the cost of living did not hit all the workers in the same way. Those who were better off were better able to survive a fall in the relative value of wages than the manual worker, for whose labour there was no steady demand and whose wages therefore rose and fell more irregularly. The great obstacle of the House of Lords having been removed, although unrest in industry still awkward, the Liberal government could now once more address the complex issue of Irish Home Rule. To that extent the Liberal government of 1912 enjoyed an enormous advantage over the Liberal government of 1893. ...read more.

Although all these predicaments could have perhaps been avoided, unless dealt with more effectively in previous years, it is undeniable that in most cases the Liberals could have been more effective in their handling of the situation. There is often a feeling that this is the case with the power struggle between the state and the House of Lords. However, this is the case where unsuccessful dealings are most likely, as two completely different groups of people, with opposite views on how the nation should be run and situations handled, are unlikely to agree without disputes and long, drawn-out arguments. With such strong conflicting views neither group would want to give in to the other, thus admitting defeat, leading to a period of arguments, manipulation and compromising. I feel that it was always going to be difficult for the Liberals to obtain their aim, therefore for them to succeed shows success in the dealings with the crisis. Exactly how successful they were in achieving their goal is difficult to analysis, as all that is available for research is the results of their dealings. These show a success for the Liberal Party, meaning that, from their point of view, their dealings with the House of Lords were successful. ...read more.