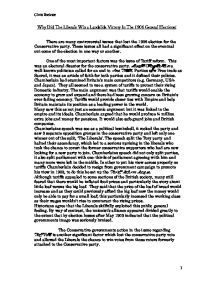 Why Did The Liberals Win a Landslide Victory In The 1906 General Elections?

Why Did The Liberals Win a Landslide Victory In The 1906 General Elections! There are many controversial issues that lost the 1906 election for the Conservative party. These issues all had a significant effect on the eventual out-come of the election in one way or another. One of the most important factors was the issue of Tariff reform. This was an electoral disaster for the conservative party. Joseph Chamberlain a well-known politician called for an end to Free Trade. Parties saw Free trade as Sacred, it was an article of faith for both parties and it defined their policies. Chamberlain had examined Britain's main competitors (e.g. Germany, USA and Japan). They all seemed to use a system of tariffs to protect their rising Domestic industry. The main argument was that tariffs would enable the economy to grow and expand and there had been growing concern on Britain's ever failing economy. Tariffs would provide closer ties with Empire and help Britain maintain its position as a leading power in the world. Many saw this as not just an economic argument but it was linked to the empire and its ideals. Chamberlain argued that he would produce 3/4 million extra jobs and money for pensions. It would also safe guard jobs and British companies. ...read more.

By doing this, these two parties are thereby making sure that the Conservative Party does not return to an extended run in power. The 1902 Education Act was another big factor in the Liberal Victory of 1906 election. This was a major piece of welfare, again backed by Balfour and his failing Conservative government. Britain is in a massive Economic competition from USA and Germany and both of the nations provided secondary and technical education for their working classes. This meant that their workers were able to bring out more thereby able to produce more. Without this secondary education act being granted, Britain would continue to fall behind other countries. The act had two main elements, it allowed Voluntary Schools to be funded by the rates and it abolished School Boards. This meant that schools were to be run by local council education committees from 1902. This act alienated the non-conformists because they felt that church schools shouldn't be funded from the rates, they wanted church schools to be abolished and because of low funding this was bound to happen, but was rescued by this act. By agreeing to this act the conservative government had alienated them selves from the vote of the non-conformists. They waged a national campaign against the act; some non-conformists didn't pay the rights and faced prison sentence. ...read more.

The state of the Conservative party seemed to justify people claims that they were a party in the decline. The departure of the famous hardworking Party members didn't do very much to help the parties cause. The departure of Richard Middleton marked a fall in organisation, which undermined their ability to fight a good campaign. More serious for the party was the fading support of the party. Their campaign was ineffective as they seemed disorganised and not united as the Liberals were. I conclude that all this incidences didn't do much to help the conservative aim for re-election but on the other hand spurred the Liberals on with more force. The Liberal victory showed that the Conservative party had been in power too long and their methods for dealing with some situations are old and ineffective. It also showed that the party was in decline and in need of some change and a serious reorganisation. All this gave the Liberals a serious chance, which they gladly took. Many historians would argue that the Liberals exploited well the failure of the Conservative party, rather than the victory of the Liberals. This because turnover seats were not caused by a mass conversion from Conservatism to Liberalism but because a large number of people who had abstained from voting were forced to vote against the Liberals and the only party available were the Liberals. Chris Ibekwe 1 ...read more.