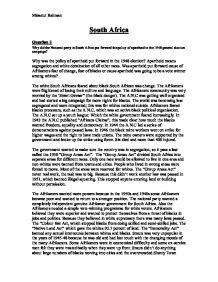 Why did the National party in South Africa put forward the policy of apartheid in the 1948 general election campaign?

South Africa Question 2 Why did the National party in South Africa put forward the policy of apartheid in the 1948 general election campaign? Why was the policy of apartheid put forward in the 1948 election? Apartheid means segregation and white domination of all other races. Was apartheid put forward cause of Afrikaners fear of change, fear of blacks or cause apartheid was going to be a vote winner among whites? The white South Africans feared about black South African was change. The Afrikaners were frightened of losing their culture and language. The Afrikaners community was very worried by the 'Swart Gevaar" (the black danger). The A.N.C was getting well organised and had started a big campaign for more rights for blacks. ...read more.

Only one race would be allowed to live in one area and non-whites were banned from towns and cities. People who lived in wrong areas were forced to move. Most of the areas were reserved for whites. The "Group Areas Act" never real work, the task was to big. Because this didn't work another law was passed in 1951, which banned illegal squatting. This stopped anyone entering land or building without permission. The Afrikaners wanted more powers because in the 1950s and 1940s some Afrikaners became poor and wanted to return to a stronger position. The national party wanted a completely independent genuine Afrikaner government for South Africa. Also the Afrikaners needed a simple vote-winning programme for white voters. Afrikaners believed they were superior and wanted to protect themselves from a threat of blacks in jobs and politics. ...read more.

The report state that the idea of total segregation could never work; that industry and trade needed a permanent settled black population in the cities; and that it was quite impossible for all the present black towns people ever to return to the already overcrowded reserves. He recommended that black families be encouraged to settle in locations in a carefully controlled way. The reason the National party won, because they were well organised and the "Apartheid" plan of the Sauer Report proved a vote winner amongst the white voters. Many farmers and whites that voted for the United Party in 1943 voted for the National Party in 1948. Further more Malan did a deal with the Afrikaner Party that won him vital seats. Nonetheless, Smuts won more than 50% of the votes cast against Malans 40%. Smuts lost because fewer votes were needed to win the rural, mainly nationalist seats, compared the urban ones. Mizanur Rahman ...read more.