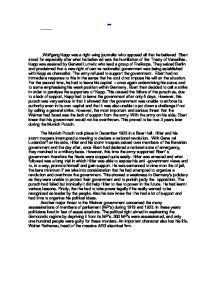 Why did the political right pose such serious threats to the Weimar Republic in the years 1919-25?

Why did the political right pose such serious threats to the Weimar Republic in the years 1919-25? During the years 1919 to 1925, the Weimar Republic was forced to face threats from both the political right and left. However, the most serious ones came from the right side which encompassed many different parties and ideas. The moderate right was often prepared to work with the Weimar government but often also opposed it. The extremists, on the other hand, openly opposed the government. In March 1920, the Weimar Republic was faced a direct threat - the Kapp Putsch. Wolfgang Kapp was a right-wing journalist who opposed all that he believed Ebert stood for especially after what he believed was the humiliation of the Treaty of Versailles. ...read more.

However, this putsch was very serious in that it showed that the government was unable to enforce its authority even in its own capital and that it was also unable to put down a challenge if not by calling a general strike. However, the most important and serious threat that the Weimar had faced was the lack of support from the army. With the army on his side, Ebert knew that his government would not be overthrown. This proved to be true 3 years later during the Munich Putsch. The Munich Putsch took place in December 1923 in a Beer Hall. Hitler and his storm troopers interrupted a meeting to declare a national revolution. ...read more.

The putsch had failed but ironically it did help Hitler to rise to power in the future. He had learnt various lessons. Firstly, that he had to take power legally if he really wanted to be recognized as leader by the people. Also he now knew that he had a lot of support and had time to organize his political ideas. Another major threat to the Weimar government concerned the many assassinations of members of parliament (MP's) during 1919 and 1923. In these years politicians lived in fear of assassinations. The political right aimed in weakening the democratic regime by depriving it from its MP's. 300 MP's were assassinated, and only one hundred people were guilty for these murders. An important character also lost his life, Walter Rathenau, head of the massive AEG electrical firm. ...read more.