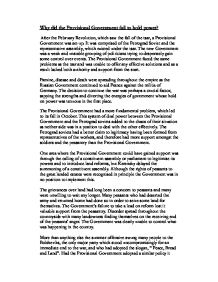 Why did the Provisional Government fail to hold power?

Why did the Provisional Government fail to hold power? After the February Revolution, which saw the fall of the tsar, a Provisional Government was set-up. It was comprised of the Petrograd Soviet and the representative assembly, which existed under the tsar. The new Government was a weak and unstable grouping of politicians trying to desperately gain some control over events. The Provisional Government faced the same problems as the tsar and was unable to offer any effective solutions and as a result lacked both authority and support from the start. Famine, disease and death were spreading throughout the empire as the Russian Government continued to aid France against the militia of Germany. The decision to continue the war was perhaps a crucial factor, sapping the strengths and diverting the energies of government whose hold on power was tenuous in the first place. The Provisional Government had a more fundamental problem, which led to its fall in October. ...read more.

Disorder spread throughout the countryside with many landowners finding themselves on the receiving end of the peasants' anger. The Government was clearly unable to control what was happening in the country. More than anything else the summer offensive swung many people to the Bolsheviks, the only major party which stood uncompromisingly for an immediate end to the war, and who had adopted the slogan, " Peace, Bread and Land". Had the Provisional Government adopted a similar policy it would not have led to its downfall and the Bolshevik seizure of power in October. What part did the revolutionary movement play in the collapse of the autocracy? The work of revolutionary parties had little effect on the collapse of autocracy as the outbreak of the war had initially cut across a revolutionary movement, which was developing in Russia in July/August 1914. From having the support of 80 percent of the active workers, the revolutionary group, the Bolsheviks, who opposed the imperialist war, were driven underground, as backward layers of the working class, mobilized by the war, embraced the ideas of patriotism. ...read more.

The tsar was politically inept and his decision to take command of the armed forces proved to worsen his reputation amongst the Russian people, as he was seen as being responsible for Russia's military defeats. By the beginning of 1917 there were demonstrations in Petrograd over food shortages, which were increasingly aimed against the tsar, and the radicalisation of the industrial workers and peasants became more significant. Demonstrations later rose to quarter of a million and the army were asked to put them down by opening fire on the crowds. Army leaders refused to do so as they were not content with the progress Russia was making in the war. This decision put a lot of pressure on the tsar who soon found that his supporters were no longer willing to save the government as they had lost their faith in it. In conclusion the end on the tsarist regime had not been brought about by the actions of revolutionary groups, as it had collapsed rather than been overthrown. ...read more.