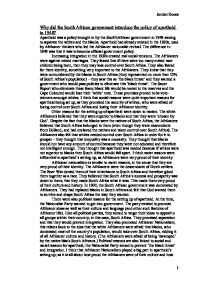 Why did the South African government introduce the policy of apartheid in 1948?

Why did the South African government introduce the policy of apartheid in 1948? Apartheid was a policy brought in by the Sou8thAfrican government in 1948 aiming to separate the whites and the blacks. Apartheid had already existed in the 1930s, used by Afrikaner thinkers who led the Afrikaner nationalist revival. The difference in 1948 was that it was to become official government policy. Increasing integration in the 1930s created real social tensions. The Afrikaners were against mixed marriages. They feared that if there were too many mixed race children being born, then they may lose control over South Africa. They also feared for there identity, something very important to the Afrikaners. They knew that they were outnumbered by the blacks in South Africa (they represented no more than 12% of South Africa's population) - they saw this as 'the black threat' and they wanted a government who would pass policies to eliminate this 'black threat'. ...read more.

They believed that South Africa's success and prosperity was down to them; that they made South Africa what it was. This made them very proud of their culture and history. In 1902, the South African government was dominated by Afrikaners. They had replaced blacks in South Africa and felt that God wanted them to survive and shape South Africa the way they wanted. There were also political reasons for the setting up of apartheid. At the time, the Nationalist Party wanted to get into government. The party existed to promote Afrikaner ideas as well as their culture and language (and other such features of Afrikaner life). Like all political parties, they aimed to target their ideas to appeal to all groups within their country; in this case, South Africa. They promised separation and that they would prevent integration. They also promoted Afrikaner Nationalism; this relates back to the idea that the white Afrikaners were afraid that blacks, who dominated most of the country's population, would take over South Africa, ridding it of all Afrikaner culture and history. ...read more.

All over the world, black colonies were campaigning for freedom. The Afrikaners feared that this would happen in South Africa; if apartheid was brought in, this would put aside any Afrikaner fears that blacks would attempt freedom campaigns and attempt to win power in South Africa. I think that these reasons did play a part in apartheid's setting up, but they were not influential and did not play as big a part as some of the other reasons in the setting up of apartheid. In conclusion, I found that all of the reasons that I have mentioned played a part in the setting up of apartheid. However, I found the most important reasons to be the racist reasons. These reasons were very influential in apartheid's setting up as the Afrikaners believed that they were better than the blacks - they thought that the blacks should not have any rights. I found that another very influential reason to be Afrikaner Nationalism, because the Afrikaners were extremely proud of their identity; they felt that they had made South Africa what it was. They thought that South Africa was rightly theirs. Jordan Hoose 1 ...read more.