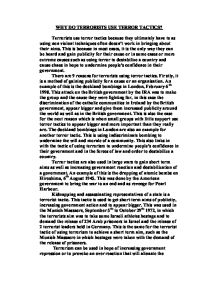 Why do terrorists use terror tactics?

WHY DO TERRORISTS USE TERROR TACTICS? Terrorists use terror tactics because they ultimately have to as using non violent techniques often doesn't work in bringing about their aims. This is because in most cases, it is the only way they can be heard and gain publicity for their cause or in some cases or more extreme causes such as using terror to destabilize a country and cause chaos in hope to undermine people's confidence in their government. There are 9 reasons for terrorists using terror tactics. Firstly, it is a method of gaining publicity for a cause or an organisation. An example of this is the dockland bombings in London, February 6th 1998. ...read more.

This is using indiscriminate bombing to undermine the will and morale of a community. This also links in with the tactic of using terrorism to undermine people's confidence in their government and in the forces of law and order to destabilize a country. Terror tactics are also used in large wars to gain short term aims as well as increasing government reaction and destabilization of a government. An example of this is the dropping of atomic bombs on Hiroshima, 6th August 1945. This was done by the American government to bring the war to an end and as revenge for Pearl Harbour. Kidnapping and assassinating representatives of a state is a terrorist tactic. ...read more.

Terrorism can be used in hope of increasing government repression or to provoke an over reaction that will alienate the population from the government. This was used by the IRA in the dockland bombings in London, although it was not very successful as the British government has stood their ground on this issue. Terrorism can also be used as a cleansing force, a way of cleaning away the things or people you don't like. This was used by the Chinese government in the Tiananmen Square massacre, 4th June 1989. The Chinese government used this tactic to clear away any form of opposition and regain its authority by needlessly killing hundreds of innocent students. All of these reasons and examples of terror tactics fit into the categories of urban terrorism, war terrorism, international terrorism, government terrorism and freedom fighters. The aims of these different types of terrorism are different. ...read more.