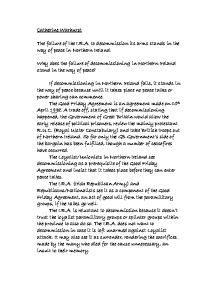 Why does the failure of decommissioning in Northern Ireland stand in the way of peace?

The I.R.A. use violence to attract attention to the ongoing conflict in Northern Ireland, such as mainland bombing campaigns and sectarian killings. These acts bring the troubles to the front pages of newspapers and to television screens all over the world. In attempts to highlight its demands and views, many innocent civilians are unnecessarily maimed and killed. The I.R.A., as a paramilitary group involved in the conflict is unable to enter into the talks because they are an illegal faction. This is why they, and other Northern Irish paramilitary groups often don balaclavas to conceal their identity while out on duty or in public. Most of these men are from groups such as the UFF (Ulster Freedom Fighters)- a loyalist faction as is the UVF (Ulster Volunteer Force), UDA (Ulster Defence Association)- also a loyalist group. The men involved in such groups are often working class men who have grown up with conflict and to them it is now a way of life. ...read more.

Recently, these groups have been fighting and killing each other endangering the peace process. These fights are often over differences in political views and methods of expressing these views. Paramilitary supporters of Ian Paisley and his party (DUP) are completely opposed to the Good Friday Agreement. Ian Paisley trusts no one. He does not want to enter talks with David Trimble's UUP or Gerry Adam's Sinn Fein or the British government, at least until the I.R.A. has decommissioned, his party see it as an imperative action which must occur before talks can commence. David Trimble wants peace, but also trusts neither Ian Paisley or Gerry Adams and their parties, he is also loosing confidence in the government of Great Britain. If decommissioning does not happen very soon, the whole peace process will grind to a halt and fall to pieces. However, decommissioning can only happen when trust is built between the parties, which in turn will require acts of good will and expressions of willingness to cooperate. ...read more.