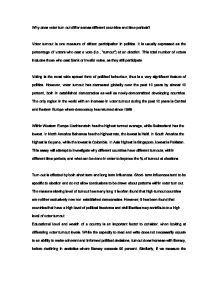 Why does voter turn out differ across different countries and time periods?

Why does voter turn out differ across different countries and time periods? Voter turnout is one measure of citizen participation in politics. It is usually expressed as the percentage of voters who cast a vote (i.e., "turnout") at an election. This total number of voters includes those who cast blank or invalid votes, as they still participate. Voting is the most wide spread form of political behaviour, thus is a very significant feature of politics. However, voter turnout has decreased globally over the past 10 years by almost 10 percent, both in established democracies as well as newly-democratized developing countries. The only region in the world with an increase in voter turnout during the past 10 years is Central and Eastern Europe where democracy has returned since 1989 Within Western Europe Liechtenstein has the highest turnout average, while Switzerland has the lowest. In North America Bahamas has the highest rate, the lowest is Haiti. In South America the highest is Guyana, while the lowest is Colombia. In Asia highest is Singapore, lowest is Pakistan. This essay will attempt to investigate why different countries have different turnouts, within different time periods, and what can be done in order to improve the % of turnout at elections. ...read more.

The type of election can also be significantly influential, Participation at parliamentary elections is only marginally higher than at presidential elections, although it should be noted that the database contains more than three times as many parliamentary elections as presidential elections. The 1,175 parliamentary elections saw an average turnout of 75 percent. However some countries have decided to enforce forms of legislation in order to force people to vote. This essay will now try to determine whether this is an appropriate way to increase turn-out Compulsory voting laws exist in approximately 30 countries of the world, with varying levels of enforcement. The enforcement of compulsory voting laws seems to have a strong influence on turnout, countries enforcing compulsory voting have on average a 10-15 percent higher turnout than other countries. Six of the top ten countries practice compulsory voting: Australia has an average turnout of 83%, Singapore, Liechtenstein, Belgium at 84%, Nauru and Austria with a slightly lower but still significantly, higher than countries without legislation at 79%. All democratic governments consider participating in national elections a right of citizenship and a citizen's civic responsibility. Some consider that participation in elections is also a citizen's duty. ...read more.

The cost of enforcement may lead some electoral administrations to lower their standards of enforcement. Many countries offer loopholes, intentionally and otherwise, which allow non-voters to go unpunished. For example, in many countries it is required to vote only if you are a registered voter, but it is not compulsory to register, such as within Australia. There is clearly a strong correlation between the level of enforcement of compulsory voting laws and voter turnout. The obvious theory supporting the positive relationship between compulsory voting and higher participation at elections is simple; each citizen's desire to avoid being punished for not voting increases the likelihood of them making the effort to vote. Enforced compulsory voting increases turnout by a little more than 15 percent, compared with countries where voting is voluntary. However, compulsory voting is not the only factor to increase Turnout with in a country. Socio-economic, political and institutional factors have all been proposed as having an impact on voter turnout. Therefore it can be concluded that there are a number of significant factors that influence the level of turn-out world wide. These include educational level, wealth, type of electoral system and type of election but a main significant factor is whether legislation is used forcing people to vote. Yet this has been found to have its advantages and also and significantly its disadvantages. ...read more.