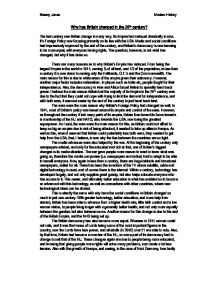 Why has Britain changed in the 20th century?

Why has Britain changed in the 20th century?

The last century saw Britain change in many way. Its Empire had reduced drastically in size. It’s Foreign Policy now focusing primarily on its ties with the USA. Media and social conditions had impressively improved by the end of the century, and Britain’s democracy is now learning to be more equal, with everyone having rights. The question, however, is not what has changed, but why it has done so.

There are many reasons as to why Britain’s Empire has reduced. From being the largest Empire in the world in 1914, owning ¼ of all land, and 1/3 of the population, in less than a century it is now down to owning only the Falklands, O.T.’s and the Commonwealth. The main reason for this is due to white areas of the empire given their autonomy. However, another major factor includes nationalism. In places such as India etc, people fought for their independence. Also, the democracy in Asia and Africa forced Britain to speedily hand back power. I believe the main reason Britain lost the majority of its Empire in the 20th century was due to the fact that they could not cope with trying to limit the demand for independence, and with both wars, it seemed easier by the end of the century to just hand back land.

The wars were the main reason why Britain’s Foreign Policy had changed as well. In 1914, most of Britain’s policy was based around its empire and control of the seas. However, as throughout the century it lost many parts of its empire, Britain then turned its focus towards is membership of the EU and NATO, also towards the USA, now being the greatest superpower. As I said, the wars were the main reason for this, as Britain could not afford to keep as big an empire due to risk of being attacked, it needed to take up allies in Europe. As well as this, when it seemed that Britain could potentially lose both wars, they needed to get help from the USA, that, I believe, is now why the ties between the countries are so tight.

The media advances were also helped by the war. At the beginning of the century only newspapers existed, and only for the educated and rich at that, one of Britain’s biggest changes is its media attention. The war gave people more reason to want to know what was going on, therefore the media companies (i.e. newspapers and radios) had to adapt to be able to benefit everyone. Now, again in less than a century, there are huge tabloids and broadcast newspapers, suited for all. There has been the invention of the TV where satellite, cable and digital technology is used, and of course there is the internet. Within a century, technology has developed hugely, and not only supplies great gossip, but also helps educate everyone who has access to it. This newer, and ultimately better education is what has enabled us to become so advanced with this technology, as well as connections with other countries, where new technological ideas can be shared.

This is exactly the same with why have the social conditions in Britain changed so much in just one century. With greater technology, better education, and more help from abroad, Britain has been able to advance from a higher death rate, little birth control and a low woman status, to people living longer with a generally better health, and not only more equality between the genders but also between races. Another reason for this change is due to the end of the British Empire, and the NHS being set up.

The British democracy has also become more equal. Whereas in 1914 women could not vote, and it was the House of Lords being some of the most important figures in the country, now the Lords have less power, and all adults (in 2002) over 21 are able to vote. Also, by that time, Britain had become a member of the EU, so some part of its democracy had to change to suit that of the EU. These changes again are due to people being more educated, and knowing that giving people more rights will solve many problems, and create a lot less tension. Also with the growth of Europe, and seeing, in the case of Nazi Germany, how badly certain people are treated, the importance of people’s rights became a lot more emphasised on.

Other factors that have changed quite drastically include Britain’s economic situations, and political parties in the country.

In 1914, Britain was a world economic power. However by 2000, Britain had lost this position, and only due to policies put forth by Thatcher, Major and Blair is Britain in a position for future sustainable growth. The reasons for this economic decline again include both the world wars, as Britain lost markets, mainly due to the USA, and the effects of the war on the world trade affected everyone. Another reason though, is due to Britain’s poor industrial relations. The weak management and poor productivity, as well as other things, contributed to Britain’s lack of competitiveness internationally, meaning they lost out on a lot of money.

The situation of the political parties has also changed. Whereas the Conservative party ruled directly by themselves for the majority of 61 out of 86 years, with the Liberal Democrats being the second largest party. It is now Labour being the most popular, then the Conservatives and the Liberals, in 2002, just a third party. The reasons for these changes include the Labour Party’s reorganisation within and adoption of less radical policies. The change of the Conservatives is due to its problems with its dividing role within Europe in 1979, this splitting issue led to its electoral defeat of 1997. The Liberals decline in position was due to conflict within the party during the First World War, which was only properly sorted out in the 70’s, therefore, they haven’t had the chance for a comeback party yet.

There are many reasons as to why Britain has changed in the 20th century, I believe this is primarily due to the world wars, but also due to the better education people have, whether that is in the sense of technology, or in how to run a country. Also, I think that every change that could have happened to Britain has happened in the last century and every aspect of the country has been affected, again, I blame this on the wars, but again, there are numerous other reasons as to why Britain has changed, and it is likely the Britain will continue to change in the following century.