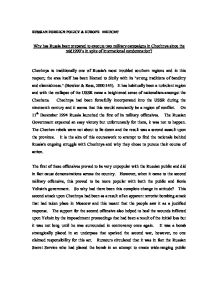 Why has Russia been prepared to execute two military campaigns in Chechnya since the mid1990's in spite of international condemnation?

RUSSIAN FOREIGN POLICY & EUROPE 00EUC307 Why has Russia been prepared to execute two military campaigns in Chechnya since the mid1990's in spite of international condemnation? Chechnya is traditionally one of Russia's most troubled southern regions and in this respect; the area itself has been likened to Sicily with its "strong traditions of banditry and clannishness." (Bowker & Ross, 2000:145). It has habitually been a turbulent region and with the collapse of the USSR came a heightened sense of nationalism amongst the Chechens. Chechnya had been forcefully incorporated into the USSR during the nineteenth century and it seems that this would constantly be a region of conflict. On 11th December 1994 Russia launched the first of its military offensives. The Russian Government expected an easy victory but unfortunately for them, it was not to happen. The Chechen rebels were not about to lie down and the result was a second assault upon the province. It is the aim of this coursework to attempt to find the rationale behind Russia's ongoing struggle with Chechnya and why they chose to pursue their course of action. The first of these offensives proved to be very unpopular with the Russian public and did in fact cause demonstrations across the country. However, when it came to the second military offensive, this proved to be more popular with both the public and Boris Yeltsin's government. So why had there been this complete change in attitude? This second attack upon Chechnya had been as a result of an apparent terrorist bombing attack that had taken place in Moscow and this meant that the people saw it as a justified response. ...read more.

This creates the economic argument that Russia was not fighting to regain a military prowess but in fact fighting to maintain some lucrative assets. This argument is probably more relevant at the moment with the terrorist attacks upon the US on 11th September 2001. These terrorist attacks have highlighted the fact that the US receives most of its oil from the Middle East and therefore, now it will be looking for other sources of fuel so that their dependency on this particular area is lessened. This is an ideal opportunity for Russia to gain an economic advantage. There have however been links made between the Chechens Rebels that oppose Russia and the terrorists that were responsible for the attacks on the US. To a certain extent, this has brought Russia and the US closer together and has given Vladimir Putin a justification of his ongoing war on the Chechens. (Kempe, 7/11/2001). If Russia can maintain their hold on Chechnya then they can offer the US an alternative to the Middle East as a fuel source. Obviously, this will not just benefit Russia economically but also politically in terms of its relationship with the West and possibly even NATO. However, it is not right to suggest that this economic factor was the only reason for the two military campaigns in Chechnya. It is fair to say that both of the military campaigns have provoked worldwide disapproval. This opposition is not only political but goes all the way from the everyday man on the street up to organisations such as the Red Cross. ...read more.

The second Chechen war allowed Putin to take control early in his political reign and therefore inspire confidence in his political and public supporters. In conclusion, Russia has faced and still faces disapproval of its two campaign in Chechnya, both on a domestic level as well as on an international level. The fact that Chechnya chose not to sign the Federal Treaty and attempted to declare its independence in 1991 can be said to be a major motivation for the actions Russian government. It is clear that Russia sees Chechnya as a valuable asset to the Federation or they would not have chosen to fight for its control. The initial campaign in Chechnya was not popular from any angle and there are arguments to suggest that the cease-fire of 1996 was as a result of the forthcoming Presidential elections. The second of the assaults though was seen in a different light and as a retaliation to a supposed terrorist act in Moscow. Whether is was actually the Chechen Rebels is not clear but it certainly unified the nation against one common enemy. There are suggestions that the second conflict was in a sense a payback-motivated action on the part of the Russian Military and there are also implications that it was in fact to help the early Presidential career of Vladimir Putin. Whether these suggestions are true or not remains questionable, however, what is relevant, is the fact that there have been two military campaigns against Chechnya. It highlights the fact that Russia sees Chechnya as more than just a state trying to gain independence but also as a source of economic and political asset to use in discussions with the West. ...read more.