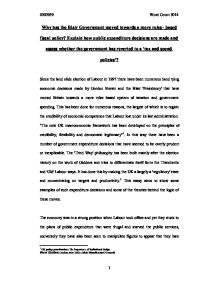 Why has the Blair Government moved towards a more rules- based fiscal policy? Explain how public expenditure decisions are made and assess whether the government has reverted to a 'tax and spend policies'?

Why has the Blair Government moved towards a more rules- based fiscal policy? Explain how public expenditure decisions are made and assess whether the government has reverted to a 'tax and spend policies'? Since the land slide election of Labour in 1997 there have been numerous hand tying economic decisions made by Gordon Brown and the Blair 'Presidency' that have moved Britain towards a more rules based system of taxation and government spending. This has been done for numerous reasons, the largest of which is to regain the credibility of economic competence that Labour lost under its last administration. "The new UK macroeconomic framework has been developed on the principles of credibility, flexibility and democratic legitimacy"1. In this way there have been a number of government expenditure decisions that have seemed to be overly prudent or inexplicable. The 'Third Way' philosophy has been built mainly after the election victory on the work of Giddens and tries to differentiate itself form the Thatcherite and 'Old' Labour ways. It has done this by making the UK a largely a 'regulatory' state and concentrating on targets and productivity.2 This essay aims to show some examples of such expenditure decisions and some of the theories behind the logic of these moves. The economy was in a strong position when Labour took office and yet they stuck to the plans of public expenditure that were frugal and starved the public services, conversely they have also been seen to manipulate figures to appear that they have spent more than they actually have. This conundrum of the Brown method is fascinating and aimed at winning the votes of the core Labour voters and by restricting the income tax rises associated with Labour it has also wooed the traditional Conservative voter. ...read more.

This can be seen in his balance the budget over the cycle policy where the cycle is an indeterminable entity. In this way the government is able to use the rules to object to an increase in spending while at the same time using the same rules to raise expenditure or claim that there has been an overall increase in spending in one area over the economic cycle. This has become known as the 'Golden Rule of politics' and has resulted in the limiting of borrowing to subsidise only capital expenditure. The well documented five economic tests to the joining of the Euro are flexible enough to allow the chancellor to decide when the UK have met them. Yet these rules and criteria give the perception that the governments hands are tied about the timing of joining or indeed it enables (to some extent) the government to avoid the debate of joining at all. Immediately after taking office the government decided to make a comprehensive spending review of all of the public and government expenditure with the aim that there would be a severe reduction in the waste in the system. This was completed within a year and was as such not as comprehensive as it may have been but still resulted in cutbacks on some areas. These have included the reduction in the pension schemes and also a withdrawal of state support for the unemployed. The whole emphasis of the Blair government has moved towards the American approach of the workfare schemes where there is only eligibility for subsidies if there is an effort at work or jobseeking. In this way there have been a shift in the priorities away from the caring Nanny State and towards a state of self-sufficiency. ...read more.

However there is also a large amount of grey areas where the chancellor has been able to make changes that are covered by his policies but allow a large amount of room for the government to manoeuvre. In this way much of the blame for unpopular increases and cuts have been put into the hands of the local councils compared with the large increases that the government and Blair have taken personal responsibility for. This government is a presidential style one that is (according to Hennessy) made of concentric rings of influence that all centre around the Blair - Brown alliance. This is a very different type of government to that of Major and Thatcher. There are very few unpopular decisions that have been made that are not blameable on the strict rules that appear essential for the survival of the buoyant economy. In conclusion the beginning of the government policy was meant to build a reputation of economic stability, this has become an obsession that has led to a system that is all apparently rules based. However behind this fa�ade is a very flexible and malleable system that both Brown and Blair can exploit to their respective economic and political aims. The Blair government has moved towards a more rules based fiscal policy in an attempt to control both the expectations of the city and also disperse the political pressure of unpopular decisions. Public expenditure decisions are made in a very Americanised way with the emphasis on workfare and using the skills of those who may choose not to work, such as single parents. The government started their term cautiously with a move away form the 'tax and spend' era of politics, yet they can be seen to be reverting to this stance. Although at present they appear to have the backing of the country if there is a perceivable increase in the quality of the public services. ...read more.