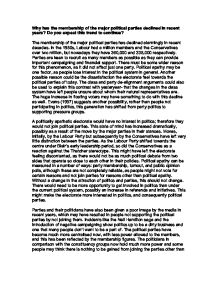 Why has the membership of the major political parties declined in recent years? Do you expect this trend to continue?

Why has the membership of the major political parties declined in recent years? Do you expect this trend to continue? The membership of the major political parties has declined alarmingly in recent decades. In the 1950s, Labour had a million members and the Conservatives over two million, but nowadays they have 360,000 and 335,000 respectively. Parties are keen to recruit as many members as possible as they can provide important campaigning and financial support. There must be some wider reason for this phenomenon, as it did not affect just one party. Political apathy may be one factor, as people lose interest in the political system in general. Another possible reason could be the dissatisfaction the electorate feel towards the political parties of today. The class and party de-alignment arguments could also be used to explain this contrast with yesteryear- that the changes in the class system have left people unsure about whom their natural representatives are. The huge increase in floating voters may have something to do with this decline as well. ...read more.

The political parties have become much more centralised now, with less power allowed to the members, and this has been reflected by the membership figures. The politicians in comparison with the constituency groups now hold much more power and some people may think there is nothing to be gained from joining the parties other than funding something that they are not a part of. Party conferences, formerly a means of allowing the member a real vote, are now seen as a media charade. The de-centralisation of the main parties would probably considerably increase their membership, as the members would be in a position to have their say and not have their party managed by an elite. Traditionally, Labour has attracted working class support whereas the Conservatives have got their vote from the middle and upper class. However, according to Crewe (1977), following the emergence of an evolved class system, with a smaller working class, the traditional class boundaries have been eliminated with people making rational choices about their vote. This is the same with whichever party they are going to join, if any. ...read more.

This could suggest that in the future party enrolment will decrease even more as the previous generation of party activists die out. In conclusion, there are five main reasons for the decline of party membership: an increase in political apathy, due in some considerable way to the move to the centre ground which has disillusioned more partisan support; the distrust surrounding politics, especially showed in the media coverage of sleaze and negative campaigning; the class-dealignment experienced by Britain as a result of de-industrialisation, which has left more people moving to a rational choice model of voting; this having resulted in an increase in floating voters who do not tie themselves down to one political party; and the younger generation's tendency to be more interested in single-issue politics than the wide spectrum of issues in politics today. If the following continue as expected, party membership will decrease even further. To stop this movement, parties and the political system will need to change to allow the electorate a bigger role in political decision-making. It should be noted that these conclusions could also be used in the explanation of the decline in the faith of the electorate in the present political system. ...read more.