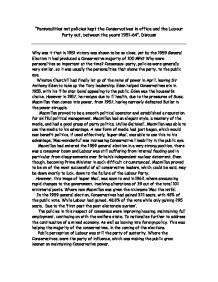 “Personalities not policies kept the Conservatives in office and the Labour Party out, between the years 1951-64”. Discuss

Why was it that in 1951 victory was shown to be so close, yet by the 1959 General Election it had produced a Conservative majority of 100 MPs? Why were personalities so important at the time? Consensus- party, policies were generally very similar, so it was usually the personalities that shone the party, to the public eye.

Winston Churchill had finally let go of the reins of power in April, leaving Sir Anthony Eden to take up the Tory leadership. Eden helped Conservatives win in 1955, with his ‘film star looks’ appealing to the public. Eden was the housewife choice. However in 1957, he resigns due to ill health, due to the pressures of Suez. Macmillan then comes into power, from 1957, having narrowly defeated Butler in the power struggle.

Macmillan proved to be a smooth political operator and established a reputation for skillful political management. Macmillan had an elegant style, a mastery of the media, and had a good grasp of party politics. Unlike Gaitskell, Macmillan was able to use the media to his advantage. A new form of media had just began, which would now benefit politics, if used effectively. ‘super-Mac’, was able to use this to his advantage, ‘Mac-wonderful’ was increasing Conservative likeability in the public eye.

Macmillan had entered the 1959 general election in a very strong position, there was a consumer boom and Labour was still suffering from internal feuding and in particular from disagreements over Britain’s independent nuclear deterrent. Even though, becoming Prime Minister in such difficult circumstances’. Macmillan proved to be on of the most successful of all conservative leaders, which could be said, may be down mostly to luck, down to the failure of the Labour Party.

However, this image of ‘super Mac’, was soon to end in 1962, where announcing rapid changes to the government, involving alterations of 39 out of the total 101 ministerial posts. Where now Macmillan was given the nickname ‘Mac the knife’.

In the 1959 general election, Conservatives had gained 321 seats, with 48% of the public vote. While Labour had gained, 48.8% of the vote while only gaining 295 seats.  Due to the ‘first past the post electorate system’.

The policies in this respect of consensus were improving housing, maintaining full employment, continuing on with the welfare state. To nationalise further to address the continuation of a mixed economy. As well as looking into foreign policy. This was helping the majority of the conservatives, in the coming of the elections.

Public perception of Labour was still the party of austerity. Where the Conservatives, were the party of influence, which was making the public grow keener on maintaining Conservative power.

Improving economic conditions and relatively rapid rates of growth in the middle of the 1950s undoubtedly helped to ensure the party’s re-election in 1955, and again in 1959.

The health of the economy was claimed to be the work of Butler, who served as Chancellor of the Exchequer between 1951 and 1955. The economy was growing fast, which enabled Butler to reduce taxes and increase spending on the welfare at the same time, which helped to keep voters happy. Full employment continued through this period.

Macmillan, who served as the minister of Housing, was able to fulfil the ‘300,000’ houses a year pledge, a year earlier than promised. Even though this was basically fulfilled by the majority of local authority housing programs, the government made a concerted effort to encourage home ownership and made it much easier to purchase a home in the private sector. This housing drive was a big source of popularity for the government, which contributed to Macmillan’s rise to power.

The Churchill administration was able to end rationing and many of the controls which had characterised the war and early post-war years. Britain moved from an era of austerity into an era of affluence-popularity of the Conservatives increasing.

In spite of Suez and the internal divisions of only 2 years previously, the Conservatives entered the campaign with an advantage in the polls.  Helping them to win a majority of 100 seats, no prime minister had ever done so well.

However, Macmillan’s ‘honey-moon’ period was soon to end. Macmillan was convinced that economic policy was the basic problem for most voters. He told his cabinet in May 1962 that trying to maintain full employment, low inflation, and the balance of payments and high rates of growth all at the same time was too much to handle.  Macmillan gambled on the idea that, controlled expansion of the economy could revive the party’s fortunes in the following year. This new approach led to the ‘night of the long knives’, where Macmillan caused great offence by dismissing many of his colleagues, radically reshuffling the cabinet, in 1962.

It was clear now, to many that Macmillan was not acting from a position of strength, but rather out of political desperation.  On the other hand, the long term damage has probably been exaggerated. It’s true that the Conservatives failed to recover sufficiently to win the election of 1964. Yet, it can be argued that the defeat might have been worse had such radical action not been taken, such as Macmillan’s economic ideas to be implemented. Expansion after 1962 was certainly an important factor in drawing voters back to the party.

Meanwhile, the government was rocked by the Profumo scandal, and by June Macmillan was fighting for his political life. Macmillan support for John Profumo, showed him to have lack of judgement on his part. This certainly weakened Macmillan’s already battered position, having to resign in 1963 with further contributing factors.

The downfall for Labour can also be linked to their internal wrangling. Labour failed to present a united face to the electorate. The split being between the extreme left and the extreme right.  Lead by Bevan with the left wing bevanites, and Gaitskell with the right wing Gaitskellites.

The major argument of the Gaitskellites supported by Anthony Crosland,  was that further nationalisation was not needed, written in the ‘future of socialism’. No longer was there a need to go over capitalism, 25% of industries had already been nationalised. The emphasis should now be on, social equality and social justice.

However in contrast, shown in the ‘Left in place of fear’, Bevan argued that capitalism had not been transformed.

Gaitskell believed in nuclear research rather than creating a disaster which Bevan believed in, nuclear deterrent disarmament. Where Britain was in control, with other countries following.  Further arguments, continued on into the public eye.

These were very, public arguments, which suggested to the electorate that there was no reason to have such a party, that the public should just put up with Macmillan, ‘you never had it so good’.