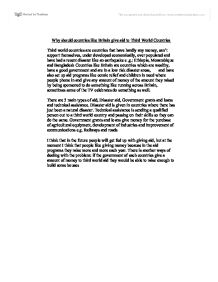 Why should countries like Britain give aid to Third World Countries?

There are 3 main types of aid, Disaster aid, Government grants and loans and technical assistance. Disaster aid is given in countries where there has just been a natural disaster. Technical assistance is sending a qualified person out to a third world country and passing on their skills so they can do the same. ...read more.

Railways and roads I think that in the future people will get fed up with giving aid, but at the moment I think that people like giving money because in the aid programs they raise more and more each year. There is another ways of dealing with the problem: if the government of each countries give a amount of money to third world aid they would be able to raise enough to build some houses ...read more.