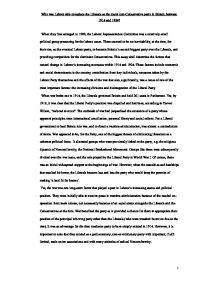 Why the Labour Party overtook the Liberal Party

When they first emerged in 1900, the Labour Representation Committee was a relatively small political group pressuring for the labour cause. There seemed to be no inevitability, at the time, for their rise, as the eventual Labour party, to become Britain's second biggest party over the Liberals, and providing competition for the dominant Conservatives. This essay shall determine the factors that caused change in Labour's increasing successes within 1914 and 1924. These factors include economic and social determinants in the country, contribution from key individuals, measures taken by the Labour Party themselves and the effects of the war that also, significantly, was a cause of one of the most important factors: the increasing divisions and disintegration of the Liberal Party. When war broke out in 1914, the Liberals governed Britain and held 261 seats in Parliament. Yet, by 1918, it was clear that the Liberal Party's position was dispelled and had been, according to Trevor Wilson, "reduced to ruins". The outbreak of war had jeopardised the existence of a party whose apparent principles were international conciliation, personal liberty and social reform. For a Liberal government to lead Britain into war, and to direct a wartime administration, was almost a contradiction of terms. War appeared to be, for the Party, one of the biggest threats of eliminating liberalism as a coherent political force. It alienated groups who were previously linked to the party, e.g. the religious dynamic of Nonconformity, the National Brotherhood Movement. ...read more.

The effects on the nation's economy had expanded the importance of the trade unions, and thus stimulated their political consciousness. This of course correspondingly enhanced the position of the Labour Party - who had always gained much of its limited importance from its links with organised labour. A significant constituent that is also connected to this is the case of parliamentary reform in the form of the Representation of the People Act. This raised the electorate from 8 million to 21 million, including males over 21, many of whom were poorer working-class males in industrial regions, and (for the first time) women over 30. This increases the representation of industrial areas, and was now no longer just applicable to householders and landlords. One can see that support for the Liberal party in industrial areas collapsed. Mining districts provided 39 of the 86 London gains for Labour in the 1922 General Election, while 28 more came from Glasgow, Greater London, Tyneside, the Clyde and Sheffield. Glasgow returns provided the most remarkable result, with labour taking ten of the seats it contested, usually on large swings. Mining areas certainly helped the overall growth of the party's popularity in the polls - the Labour vote rose from 22.2 per cent in the 1918 'coupon' election to 29.4 per cent in 1922. Yet, the seats where Labour lost heavily in 1922 came in two main categories: agricultural seats, especially in the South Midlands, together with the textile districts of East Lancashire and West Yorkshire. ...read more.

Labour was larger than both factions of the Liberal Party combined. In 1924, Labour held 191 seats, and 30.5 per cent of the total vote. This is where they formed their first administration, albeit a minority one which lasted less than a year. Throughout the 1920s, the Labour party's electoral strength increased while that of the Liberals' waned. In 1929, labour became the largest single party, and it was in 1945 when they finally held the top position as a majority government. In conclusion, it is clear that there are many reasons that contribute to the overtaking of the Liberals by the Labour Party within this decade. In my opinion, the most important factor would be the outbreak of war, due to the repercussions it held for both Labour and the Liberal Party. The Liberals suffered from deep divisions within its own ranks, and this gave Labour an opportunity to benefit in political power. War also meant that the economic situation of Britain was changing, and this led to a social turnaround, with the increasing importance of trade unions. The effects of the war on the population were also significant, as it led many to believe that Labour was a better alternative to the wartime governments, which disillusioned many across the different social classes. Electoral success for Labour was also due to the changing policies of the party, and the efforts made by Ramsay MacDonald, which resulted in their transition from being a party of protest to a party of power. ?? ?? ?? ?? Why was Labour able to replace the Liberals as the major non-Conservative party in Britain, between 1914 and 1924? 1 1 ...read more.