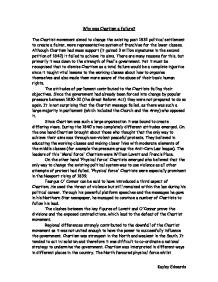 Why was Chartism a failure?

Why was Chartism a failure? The Chartist movement aimed to change the existing post 1832 political settlement to create a fairer, more representative system of franchise for the lower classes. Although Chartism had mass support (it gained 3 million signatures in the second petition of 1842) it failed to achieve its aims. There are many reasons for this, but primarily it was down to the strength of Peel's government. Yet it must be recognised that to dismiss Chartism as a total failure would be a complete injustice since it taught vital lessons to the working classes about how to organise themselves and also made them more aware of the abuse of their basic human rights. The attitudes of parliament contributed to the Chartists failing their objectives. Since the government had already been forced into change by popular pressure between 1830-32 (the Great Reform Act) they were not prepared to do so again. It is not surprising that the Chartist message failed, as there was such a large majority in parliament (which included the Church and the Army) ...read more.

Through his powerful platform speeches and the messages he gave in his Northern Star newspaper, he managed to convince a number of Chartists to follow his lead. The clashes between the key figures of Lovett and O'Connor prove the divisions and the exposed contradictions, which lead to the defeat of the Chartist movement. Regional differences strongly contributed to the downfall of the Chartist movement as it was not united enough to have the power to successfully influence the government. Chartism was strongest in the North and weakest in the South. It tended to act in isolation and therefore it was difficult to co-ordinate a national strategy to undermine the government. Chartism was interpreted in different ways in different places in the country. The North favoured physical force whilst Birmingham had close links to 'moral force' Chartism and the Anti-Corn Law league. Scotland also had its own views about Chartism and the message was spread through the idea of 'Christian Chartism'. ...read more.

A mid-Victorian boom lead to rising wages and increased food consumption. As the people were relaxed and happy they had more faith in the government and economy and therefore their support for the Chartists declined. In the short term these points would suggest that Chartism achieved very little. Yet is this a fair evaluation of such a complex movement? Perhaps it is fairer to say that in the long term Chartism did achieve a great deal as all but one of the six points in the Charter had been put into effect by 1918. The lessons learnt from the Chartist struggle were to be of vital importance when the question of the extension of franchise appeared again in 1867 and 1884. Rather than to dismiss the movement, E. Hopkins, in A Social History of the English Working Classes, 1815-1945 (1979) claims that the Chartist movement represented "the most striking and wide spread working class movement for political reform in the 19th century". Kayley Edwards ...read more.