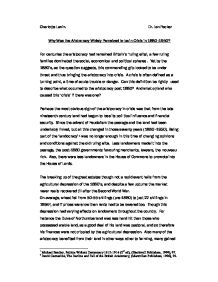 Why Was the Aristocracy Widely Perceived to be in Crisis in 1880-1950?

Charlotte Lavin. Dr. Ian Packer Why Was the Aristocracy Widely Perceived to be in Crisis in 1880-1950? For centuries the aristocracy had remained Britain's 'ruling elite', a few ruling families dominated the social, economical and political spheres. Yet by the 1880's, as the question suggests, this commanding grip looked to be under threat and thus bringing the aristocracy into crisis. A crisis is often defined as a turning point, a time of acute trouble or danger. Can this definition be rightly used to describe what occurred to the aristocracy post 1880? And what or/and who caused this 'crisis' if there was one? Perhaps the most obvious sign of the aristocracy in crisis was that from the late nineteenth century land had begun to lose its political influence and financial security. Since the advent of Feudalism the peerage and the land had been undeniably linked, but all this changed in those seventy years (1880-1950). Being part of the 'landocracy'1 was no longer enough in this time of changing opinions and conditions against the old ruling elite. Less landowners made it into the peerage, the post-1880 governments favouring merchants, lawyers, the nouveau rich. Also, there were less landowners in the House of Commons to promote into the House of Lords. ...read more.

The extent of the number of those forced to sell estates and vast acres of land indicated a clear trend in the dramatic decline of the landed ruling elite in just seventy years. The turn of the century also saw the introduction of the so-called 'super tax'6; a twenty percent duty on land values when estates changed hands. The liberal need to assert the difference between an earned income and those on an unearned income had again made the aristocracy crisis, and highlighted the changing attitudes towards the aristocracy. Status, had for a long time been the mainstay of the old aristocracy, it was the way they conducted most of their business from marriages to political allegiances, but this too had come under threat from the 1880's. The decline in the importance of land had played a major role in creating a social crisis for the old elite. The advent of the noveau riche, created by the industrial revolution and included such as newspaper and railway magnates. They threatened to dilute the social exclusiveness of the aristocracy by 'buying' peerages from the government by making heavy donations to the party in power. This and the lure of big money and intermarriage made it impossible for the aristocracy to rule or defend as a class. ...read more.

There were no aristocratic Prime Ministers from 1905 with the resignation of Balfour, to 1940 with the election of Churchill, and even he was half American11. By this time and after the role of the aristocracy in the Cabinet was more a fa�ade than a genuine attempt to continue in power. Politics had become more professional than just a family obligation within the seventy years. Many aristocracy could no longer afford to dabble in politics and with rising hostility against them they, like Napoleon from Moscow, made a final tactical withdrawal form government politics altogether. Thee aristocracy was 'widely perceived' to be in crisis from the 1880's onwards because the power by which they dominated for centuries spiralled into decline without them being able to prevent it. Key factors like the rise of Liberalism (inspiring a change in attitudes) and the growth of capitalism (and thus new areas of wealth) meant that the archaic principles of Feudalism, which had protected the aristocracy for so long, were no longer viable. The term 'crisis' is justified in this instance, due to the pace at which the aristocracy declined politically, economically and socially, a mere seventy years. It was a disaster for the old ruling elite, from which they are unlikely ever to recover. ...read more.