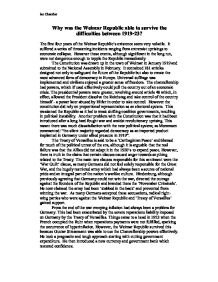 Why was the Weimar Republic able to survive the difficulties between 1919-23?

Why was the Weimar Republic able to survive the difficulties between 1919-23? The first four years of the Weimar Republic's existence seem very volatile. It suffered a series of threatening incidents ranging from extremist uprisings to economic collapse. However these events, although significant in the long run, were not dangerous enough to topple the Republic immediately. The Constitution was drawn up in the town of Weimar in January 1919 and submitted to the National Assembly in February. It contained 181 articles designed not only to safeguard the future of the Republic but also to create the most advanced form of democracy in Europe. Universal suffrage was implemented and civilians enjoyed a greater sense of freedom. The chancellorship had powers, which if used effectively could pull the country out of an economic crisis. The presidential powers were greater, revolving around article 48 which, in effect, allowed the President dissolve the Reichstag and take control of the country himself - a power later abused by Hitler in order to take control. However the constitution did rely on proportional representation as an electoral system. This weakened the Republic as it led to weak shifting coalition governments, resulting in political instability. ...read more.

He then introduced a new currency and government bank which restored confidence. The Weimar Republic suffered many attempted communist revolutions without any getting close to succeeding. The principal reason for the Left's failure was that it never accounted for more than 15 percent of the vote in the polls. As a result, the radical Left never possessed sufficient mass appeal to generate the type of spontaneous support needed to overthrow the government, in contrast to their communist colleagues in Russia. In particular, most left wing support was rather more moderate than in Russia, with the relatively popular democratic SDP being committed to trade unions and 'evolution rather than revolution'. However, the Left's failure to gain greater influence can also be traced to a number of other reasons. First, the movement was poorly organised and unprofessional. Although it could count on the forceful leadership of Karl Liebknecht and Rosa Luxemburg, who were able to unite many small left wing parties under the name of the German Communist Party (KPD), a number of revolts took place sometimes without leadership endorsement. The result was sporadic, disconnected uprisings which could be dealt with relatively easily by the Freikorps (a right-wing party of ex-soldiers). ...read more.

Clearly, if Kahr had offered support towards the Nazis the existence of the Republic would have been seriously threatened. Secondly, not only did the right not gain the support of the moderate majority, but its plans were thwarted by the left-centred parties. For example, the Kapp Putsch was ended when the strong trade unions in Berlin were able to call a general strike, closing down the provision of all central services such as electricity. Finally, the use of Article 48 by President Ebert was equally effective against the right and it was against the left-wing inspired uprisings. At no point was the government threatened at national level, whilst at regional level the military commanders had sufficient strength to restore social order. The disorganised state of the far right and far left political parties, the wavering attitude of the army, the introduction and subsequent use of Article 48, and the general economic management skills displayed by the chancellorship, all combined to prevent any effective right or left-wing dominated government overthrow. However to survive the threats the government had to concede some factors (the alliance with the un-diplomatic army and thus commitment to the extreme right) which would harm it in the long run. Ian Chandler ...read more.