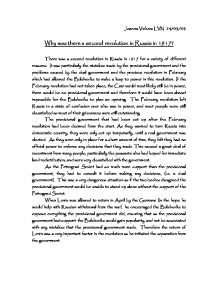 Why was there a second revolution in Russiain 1917?

released the Bolshevik leaders from prison and armed their supporters. However, Kornilov never reached Petrograd, and so the Bolsheviks were left free and armed in Petrograd, leaving them in a perfect position to begin a rebellion. Soon after this, the Bolsheviks won control of the Petrograd Soviet, and demanded that the soldiers must obey the Soviet. This gave them power to up rise, on the 25th October the Winter Palace was stormed, and a week later the Bolsheviks won control in Moscow. Altogether, I think it is fair to say that the February revolution was the long term cause for the second revolution, as it left Russia unstable and confused over who was in control. The short term reasons were the mistakes made by the provisional government and their increasing unpopularity, and also Lenin's cunning plans to attract support away from the provisional government to the Bolsheviks. ...read more.