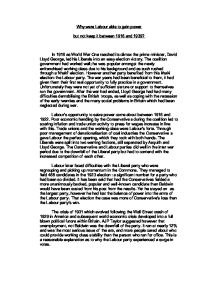 Why were Labour able to gain power but not keep it between 1918 and 1939? In 1918 as World War One reached its climax the prime minister, David Lloyd George, led his Liberals into an easy election victory. The coalition government had worked well; he was popular amongst the newly enfranchised working class due to his background and as such rushed through a 'khaki' election. However another party benefited from this khaki election: the Labour party. The war years had been beneficial to them, it had given them their first real opportunity to fully practice in a government. Unfortunately they were not yet of sufficient stature or support to themselves run the government. After the war had ended, Lloyd George had had many difficulties demobilising the British troops, as well as coping with the recession of the early twenties and the many social problems in Britain which had been neglected during war. Labour's opportunity to seize power came about between 1918 and 1922. ...read more.

This is a reasonable explanation as to why the Labour party experienced a surge in votes. Therefore it is easy to see the circumstances in which the party managed to achieve success, yet why they failed to hold on to it is more contentious. The period of 1929 to 1931 was possibly one of the most difficult politically, with the exception of wartime, in twentieth century politics. Ramsay MacDonald promised to sort out the Coalmines Act, a Housing Act, unemployment issues and also foreign policy, which was extremely popular with the working classes. Baldwin held office for most of the nineteen twenties, with the exception of the Labour party's short periods. Baldwin found himself out of office almost as a rebellious act by the British people, who, when dissatisfied with an event or policy's handling dared to vote out in protest. The General Strike of 1926 had caused much discontent amongst the British people; the economic crises of the early and late twenties much worry. ...read more.

The coalition however was strong. Ramsay MacDonald continued as Prime Minister to 1935, and the National Government which succeeded was only interrupted by war in 1939. In conclusion Labour was able to gain power through appearing to be revolutionary: they were the answer to many working class people's prayers, but they fell down through their distaste for strong left wing, socialist action. This disappointed their heartlands and didn't win over enough of the middle ground voters, who had probably voted Liberal before. The pull of Asquith and Lloyd George and their mild resurgence meant that Labour lost votes where they should have pulled out all the stops, such as in 1929 when they roundly trounced the Conservatives 'safety first' policy through imagination and creative policies. They soon went the way of the main parties in forgetting their traditional voters in an attempt to woo new ones, and lost character MPs such as Mosley who were the future of the party from the ageing MacDonald, Henderson and Snowden. ...read more.